Surviving Christmas With The Relatives: But can you survive this movie?

Review: ’Tis the season for any old holiday themed rubbish in the cinemas 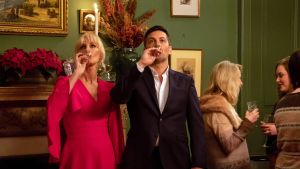 Joely Richardson and Michael Landes in Surviving Christmas with the Relatives

‘Tis the season for any old holiday themed rubbish. And the lazily titled Surviving Christmas with the Relatives – really? – is any old holiday rubbish. Writer and director James Dearden has had an interesting career: his screenplay for Fatal Attraction was nominated for an Academy Award, his 1991 version of A Kiss Before Dying saw Sean Young nominated twice at the Golden Raspberries, his 1988 drama Pascali’s Island played in competition at Cannes. How he signed off on this hodgepodge of comings-and-goings is baffling.

Despite the insistence of the soundtrack – Chris Rea’s Driving Home for Christmas, etc – and the presence of a turkey called Gobbles, there’s nothing remotely seasonal about this muddled farce. “It’s a family tradition,” explains Miranda (Gemma Whelan) as her fixer-upper home in the country is descended upon by hordes of relatives and randomers.

Meanwhile, Julian Ovenden heads to London to fetch his weed-using son, Harry (newcomer Jonas Moore) to participate in the film’s most squandered plotline. And then there’s the vicar, an elderly uncle (James Fox), several dogs, assorted children and 20-somethings, east European builders, and a cat.

As ever, dinner is ruined, not once but twice. The east Europeans get ruinously drunk.

At no point do any of these developments threaten to coalesce into a movie structure. Never mind Christmas. Can you survive Surviving the Relatives at Christmas?