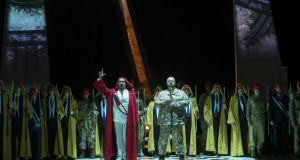 Irish National Opera (INO) is concluding its first year in operation with performances of Verdi’s Aida. By tackling an opera famed for its massiveness – 160 performers between cast, chorus, and orchestra INO is ending 2018 with the same characteristic with which it started back in February when its inaugural offering was a contemporary piece (Thomas Adès’s Powder Her Face) rather than a safe classic: confidence.

A strong impression of this confidence permeated Aida’s opening night last Friday, created not only by the performances and production on view but also seemingly embedded in the decision-making behind them. This is evident in the vision of director Michael Barker-Caven who transfers Verdi’s original tale of love, war and conflicting loyalties from the ancient Egypt of the pharaohs to the context of our own times. Here Aida, the foreign slave-prisoner, reminds us of the illegal immigrant or asylum-seeker, with Radames admiring her image in a scan of her passport on his laptop. Within the huge chorus, the distinctions between priests, priestesses, soldiers and officials are blurred by elegantly dressing everyone in the costume of corporate and governmental power - the business suit.

The director clearly favours one side of Verdi’s complicated politics in Aida. While the famous, brassy triumphal march shows the composer using imperial Egypt’s victory to mirror Italy’s rise to independence, elsewhere Verdi’s sympathies lie with the independent spirit of downtrodden Ethiopia, the empire’s tiny enemy and Aida’s homeland. Barker-Caven latches onto the word “rumour” in the libretto and topically depicts reports of an imminent invasion as media manipulation worthy of Fox News. Its well-dressed elites notwithstanding, empire is presented as tasteless: the returning soldiers celebrate their beatdown of the Ethiopians with Chippendales-style strip dances, welcomed by ecstatic, pom-pom-flourishing cheerleaders.

Verdi’s other balancing-act in Aida is between grandeur and intimacy. In INO’s production, private scenes from the opera’s love story are presented with a forceful power that matches that of the sweeping political backdrop against which they are projected. Credit for this is due above all to the excellent cast. Soprano Orla Boylan takes quiet vocal command of the notoriously demanding title role, for example expressing with subtle, compelling poignancy Aida’s inner conflict when her father – strong and implacable in the performance by Ivan Inverardi – deploys emotional blackmail to secure her support for his tactics against the Egyptians. Gwyn Hughes Jones succeeds as both hero and lover without recourse to histrionics, his clear tenor a model of persuasive but unfussy melodic speech in the role of Radames. Inner conflict is no less painfully portrayed by mezzo-soprano Imelda Drumm as Amneris, Aida’s jealous rival, notably as she listens to the trial and sentencing of the man who has rejected her.

This courageous INO production therefore succeeds on the two levels of story and spectacle. The latter is a triumph for the set and costume designs of Joe Vanek and the lighting by Paul Keogan, and for the vast co-ordination of dance and movement with choreographer Liz Roche. Conductor Fergus Sheil extracts a dramatic and sensitive musical partnership from the RTÉ Concert Orchestra and the Bord Gáis Energy Theatre makes an effective stand-in for a Dublin opera-house.

Further performances on November 27th and 29th, and on December 1st

Has Britney Spears really been judged incompetent to vote?
10