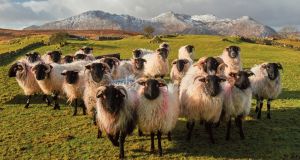 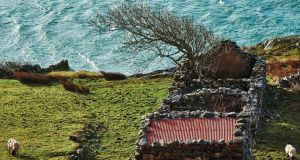 Ballinakill Harbour from the book Connemara & Aran by Walter Pfeiffer

Photographer Walter Pfeiffer once met a man from Roundstone who told him “Connemara is grey”.

“Grey it certainly is on countless days in winter and often enough when that low sky over the Twelve Bens smothers the land and drains what colour there is,” Pfeiffer wrote in the introduction to a new collection of photography published at the Clifden Arts Festival.

“And yet there’s colour to be seen if you look for it with an open eye and mind,” Pfeiffer wrote, describing how, when publisher Vincent Murphy asked him to return west, he “followed the light from early morning to late evening, from sparkling spring dawns to the depth of dark and grey winter days”.

“All it takes is a rising wind moving in from the Atlantic, baring the Aran Islands, lifting the clouds over Connemara and revealing a sea and landscape abundant with colour, at times so rich and brilliant that it feels like they lost their way en route to sunnier climes,” he wrote.

Pfeiffer died unexpectedly last April, but “ left us a fabulous legacy,” according to Mr Murphy of Artisan House Editions, based in Letterfrack, Co Galway.

Mr Murphy, a close friend, had commissioned the photographer to work on a sequel to two previous books of landscape photography Wicklow: A Personal View (2000) and Connemara & Beyond (2005).

Regarded as one of Ireland’s foremost photographers, Pfeiffer spent three weeks on the Aran Islands in 1964 when he first visited from his native Cologne in Germany. It had an “irreversible impact” in that he returned the following year to make Ireland his home. His son and daughter Nick and Nadia were among those invited to the launch of the book on Sunday.

In his preface to the book, archaeologist Michael Gibbons highlights Pfeiffer’s “deep knowledge and empathy” for Connemara and Aran. He ranks the late photographer among a pantheon of chroniclers who “manage to show the complexity and the sheer beauty of the landscape” from Pádraig Pearse, Ludwig Wittgenstein and JM Synge to Robert Flaherty, Paul Henry and Tim and Maireád Robinson.

Mr Gibbons is due to speak on Newgrange and the Connemara connection at the Clifden Arts Festival on Tuesday. His sister and fellow archaeologist Erin Gibbons is participant in an artistic interpretation of archaeological work on Inishlyon, a tidal island off the east coast of Inisbofin, Co Galway.

Climate change is having a “devastating impact on the archaeology and built heritage of the Irish coastline,” said Ms Gibbons.

The Inishlyon project was set up to respond to the exposure of an eroding village in sand on the island in early 2014. An initial survey recorded four sunken houses, along with associated middens and shards of 19th century pottery. Several sunken houses were excavated on the island in 2016 and 2017, and the discovery of two sickles suggested that the village was used seasonally by kelp harvesters, she says.

Connemara & Aran by Walter Pfeiffer is available for €25, and a limited edition with a CD recording of the poets and the author, interspersed with music by harpist Kathleen Loughnane, is available at €100 from Artisan House Editions.artisanhouse.ie