Booker Prize 2019: The books to read, and the ones you can skip

As Monday's announcement nears, we assess the shortlist and hazard a guess at the winner 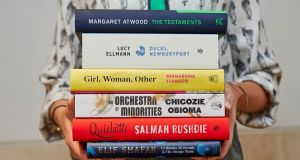 This year’s Booker Prize shortlist provides the hungry book lover with lots to talk about before you even begin reading the books (and who has time for that?). The judges, with scant regard for our busy lives, work demands and social media commitments, have given us the longest shortlist in recent memory: the average length of the six books is 530 pages.

It’s a shortlist with welcome diversity and range – writers born in Canada, Nigeria, India, Turkey, the United States and Britain – and the first Booker shortlist in the prize’s 50-year history with no white men.

There is a lot of formal innovation in the shortlisted titles, with a non-linear approach to storytelling in most of the books, and fantastical or speculative elements in half of them. It’s a modern list in other ways, too, with most of the books referencing current hot topics, including Donald Trump, transgender issues and opioid addiction.

But what are they like, and who will win? Ahead of Monday night’s winner announcement, I’ve read the six shortlisted titles to give you a flavour of where the smart money might lie. In reverse order, my ranking goes like this – but will the judges agree?

10 Minutes, 38 Seconds in this Strange World

This is the ninth novel by prolific Turkish author Shafak, who writes in both Turkish and English. The title describes the length of time when the brain reportedly continues to think after death; and the first half of the book unreels the memories of a murdered sex worker, Leila, as she lies dying in a wheelie bin. The second half follows her friends as they try to find her body. That’s a meaty concept, and Shafak has lots of stories to tell, but I found the execution strangely lifeless (no pun intended). Cliches abound – shadows passing across faces, sadness pooling in beautiful eyes, raven hair falling in waves – and there are not many surprises in what we learn about how women and sex workers in particular are treated in Turkey (spoiler: not well). This book has important things to say, but it doesn’t feel like an important book.

An Orchestra of Minorities

With An Orchestra of Minorities, Chigozie Obioma becomes one of the few non-debut authors to have all their novels shortlisted for the Booker Prize. (Rohinton Mistry, I think, is the only other one.) The story is one of love across class divides among the Nigerian Igbo people, narrated by the lovelorn protagonist’s guiding spirit or chi. The plot, at least in the later stages, very loosely evokes The Odyssey and (even more loosely) The Count of Monte Cristo, and there’s plenty to chew on, but its telling is so glutinous and stuffed with purple prose that momentum becomes inertia. Like Quichotte, this is maximalism-plus. Perhaps the style is explained by the book’s adherence to Igbo cosmology, although fellow Igbo novelist Chinua Achebe managed to finish his stories in a third of the time.

Reading Rushdie’s latest novel, with its characteristic tidal wave of pathological pun-making, paragraph-long lists and how-do-you-do-fellow-kids cultural memery, made me think of the question Frasier Crane once asked Niles: “When was the last time you had an unexpressed thought?” Really it’s a credit to Rushdie that, 45 years into his career, he’s still writing with such full-blooded force, and you can bounce happily along on his sentences for hours. But it’s their very resilience that makes it hard to sink more deeply into the story, which is inspired by Don Quixote – which partly explains the abundance of detail – and takes in racism, immigration, opioid addiction, other aspects of modern America – oh, and the end of the world. It bristles with literary know-how, quoting from writers like Vonnegut, Heller and Bellow, and it’s multi-metafictional, too, with characters creating characters creating characters, if you like that sort of thing. Normally I do, but Quichotte treads a very fine line between entertaining raconteur and pub bore.

If you’ve been overwhelmed by the media hoopla over Atwood’s sequel to The Handmaid’s Tale, just wait for Hilary Mantel’s The Mirror and the Light next year. The Testaments is the fastest-selling book of the year but the recipient of mixed reviews. It’s meticulously constructed, giving a portrait of the start of the end of theonomic, women-oppressing society Gilead from within and without, narrated in turn by a young woman in Gilead, a young woman in Canada whose connection to Gilead is closer than she knows, and Aunt Lydia from The Handmaid’s Tale, who shares her origin story and tips the reader toward understanding: up to a point. “Gratitude is valuable to me,” she says. “I like to bank it for a rainy day. You never know when it may come in handy.” The Testaments, despite its multi-voice structure, has perhaps the strongest plot of all the Booker shortlist titles, which provides a satisfaction of its own.

The longest book on the list – a thousand pages, mostly in one sentence – is actually easy to read and great fun: for a while. It gives us the rolling, quotable thoughts of an American woman as she bakes pies, crammed with puns, jokes, memories and rants about Donald Trump. It’s full of life, funny with excellent comic timing, and touching in its portrayal of a good woman driven to despair. Its amplitude is both its essence and its burden – if there was any doubt that the scale of the thing was out of control, it’s affirmed by Ellmann’s disclosure in interviews that she added 30,000 words (“not intentionally, it just happened!”) at the editing stage. There’s no doubt that Ducks is a work of considerable artistry and originality – but I found it a slog end to end.

This is the pick of the Booker shortlist for me. It is the only novel that had me enthralled and engaged throughout, with its cast of 12 distinctly drawn narrators giving perspectives on what it has meant to be a woman, and in particular a black woman, in Britain over the past hundred years. Evaristo’s style is innovative (written in a sort of blank verse that provides a versatile format for delivering her characters’ thoughts) but always inclusive, and manages to be funny, moving and provocative, often on the same page. On the shortlist only Lucy Ellmann’s narrator can compete with Girl, Woman, Other for depth of character, but Evaristo has done it several times over, even if some of the women are inevitably more richly drawn than others.

The ones that got away

And how about the ones that got away? From this year’s longlist I mourn the loss of Jeanette Winterson’s Frankissstein, which is smart and ultra-modern but doesn’t take itself too seriously, and Max Porter’s Lanny, which combines innovative myth-making and page-turning urgency. I enjoyed both much more than some of the books that did make the shortlist.

There are also a handful of novels that have been highly acclaimed this year but didn’t make even the Booker longlist, including Edna O’Brien’s career-topping Girl, Yiyun Li’s devastating Where Reasons End, Colson Whitehead’s potent The Nickel Boys, Téa Obreht’s Obama-seducing Inland and Joseph O’Connor’s rollercoasting Shadowplay. These overlooked novels will not be having their moment in the moonlight tonight – but who will?