Is this fake radio station even better than the real thing?

Gerard Byrne reckons commercial radio is genius minimalist artwork. So he built his own 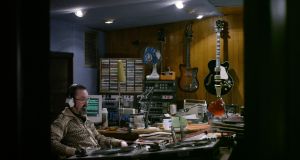 In Our Time is Gerard Byrne’s first exhibition with the Kerlin Gallery, Dublin. It is an elaborate video installation, set in an imagined commercial radio station in the United States at an unspecified time – perhaps the 1970s or 1980s – and runs continuously during gallery opening hours. You might notice that whenever you happen to visit it, real time corresponds to the time on-screen.

The camera prowls curiously through the studio, registering banks of cassette tapes, an open-reel tape recorder, tangles of cables, walls of monitors and much else. The presenter ushers things along gently, introducing generally mellow, familiar tracks, offering a relaxed, observational commentary. The clock ticks onwards.

As ever with Byrne, he does not try to make a fictional imitation of a radio studio – such as the one in, for example, Grosse Point Blank. While he has often restaged source texts such as interviews, he goes against the grain of dramatic expectation with strategies of Brechtian alienation built into his method. This can take the form of unpredictable, unconventional camera angles and movements, or actors not behaving in character, or other sneaky, tangential devices.

While the aim of representation is usually seamless illusion, he tears the narrative fabric, reminding us that cultural forms and constructs are of their time and circumstances, and our perception and interpretation of them are similarly grounded in our own temporal perspective.

In Our Time was commissioned by Sculpture Project Münster 2017 in Germany, a group exhibition of art in public spaces in the city of Münster that has been held at 10-year intervals since 1977. It is a prestigious event, and it is an honour to be invited to take part – but then, of all Irish artists of his generation, Byrne probably has the highest international profile.

He has an extensive record of exhibiting abroad and is represented by Lisson Gallery in London and New York (where In Our Time is also currently showing).   “One of the things that sets Münster apart is that it’s practically all new work, so there’s this engagement with the city on the part of 20 to 30 artists. Also, that Social Democratic dimension, which was very prominent in the 1970s, is still there, which is not typical of the way the art world has gone, really.”

There was a roughly 18-month lead-in time. Byrne first visited Münster in February 2016. He had it in mind to do a radio-oriented piece at some stage, and it seemed a good fit. “Radio over the airways – not dependent on a broadband connection, say – always appealed to me. That it is so indiscriminate, because you don’t know who’s listening, anyone with a radio can listen.” Somehow, that chimed with the democratic ideal of the sculpture show’s origins. “And I thought, that era of radio, there’s a certain sense of community to it, and it speaks to the idea of a less fractious US.”

In addition he notes: “If you look at my earlier work, there’s long been an interest in the visual re acoustic patterns – some image of time constructed through media. I’m not saying I was thinking of all these things, but all the same I feel they did inform my decisions as I was finding the work.” Finding it in the physical, geographic sense took a while. “Fixing the location took longer than I thought. I mean, it’s not a site-specific piece per se. There isn’t a structured relationship between the space and the work, but it’s still important that they fit together.”

In the end, they did. “We ended up in the basement of the main public library, which is one of those 1990s-cast concrete buildings. In the basement there’s a music library, a children’s library and one of those rooms of uncertain purpose you tend to find in modern buildings. They hire it out as a rehearsal space to musicians, and it was acoustically treated.”

Münster’s musicians were temporarily displaced (the show runs for 100 days through the summer), as Byrne’s radio station moved in. The radio station we see was created or, that is to say, aspects of it were, in Westland Studios on Lombard St in Dublin. It certainly looks the part. While shelves of cassette tapes and other props were imported, most of what’s visible (in the dimmed light of the studio setting) in terms of technology and surroundings is unaltered. “Funnily enough, despite all that’s happened technologically, a lot hasn’t changed since the 1970s. A microphone is still a microphone.”

Byrne listened to radio broadcasts from the 1970s and 1980s. “I took a lot of little sections and put them together.”

That was the script. The core idea is: “The whole point of this kind of radio is that it doesn’t have a beginning, middle and end. The broadcasters speak in a very particular way. They can’t refer back, or anticipate. It’s built on pattern, like wallpaper. The core attribute of a pattern is that you can experience it in bits. Which is the way commercial radio is experienced – you get in the car and turn it on. You turn it off when you arrive where you’re going.”

The presenter doesn’t presume that you’ve heard the beginning of their programme, because you probably haven’t. So Byrne assembled a sequence of modular bits – comments on durably popular music, the weather, the traffic, life and whatever else.

Somewhere in his mind, he had the artistic model of minimalism. Minimalism “and its legacies” are a long-running preoccupation. It’s an intriguing idea: that commercial radio, if not quite a minimalist artwork, embodies a minimalist aesthetic. Presented with the “script”, Byrne says, Phelim Drew (the DJ in the video), was slightly nonplussed. “I could see that it must be really difficult for an actor, because the normal questions of performance, like dramatic trajectory, don’t apply.”

From these modular bits, Byrne set to work editing, as he puts it, an unusually large file of 12 hours’ duration – so long that some technical improvisation was needed. “Editing facilities aren’t really rigged to handle 12-hour files.” He worked with long-term collaborators, including Sven Anderson. “I’ve worked with Sven for six or seven years. He is an artist himself and I trust his judgment completely.”

Visitors are unlikely to stay through the entire 12 hours. Given gallery hours, they can’t. But within the 12 hours there are some subtle repetitions, which reinforces the point of the wallpaper nature of radio.

Byrne’s move from Dublin’s Green on Red Gallery (where he’d shown since 1999) to the Kerlin aroused comment in the art world. He points out that he joined Green on Red when he was still in New York, where he spent much of the 1990s. “No-one knew my work in Ireland.”

Then Green on Red moved out of its Lombard Street space and, Byrne says: “It wasn’t quite clear what was going to happen.” He shows extensively elsewhere, but obviously it’s important to have a gallery in Ireland as well. Green on Red did relocate, to its current premises on Spencer Dock, which though spacious, has a temporary character. Something that “has its attractions”, Byrne acknowledges.

He was also shaken by the loss of his studio in Broadstone Studios, a casualty of the property boom that was interrupted by the bust but has certainly returned to Dublin. Byrne has been vocal about how artists are being squeezed out. “Artists, by being there, contribute to the texture of the city. It’s good to have them there. To some extent, they don’t recognise their own value as a lobby, you know – trying to organise artists is like herding cats.

“For myself, I knew it would be disruptive to not have a studio, but I was shocked by how just how disruptive it was. You lose track of things, it becomes chaotic. The experience has left me with the resolve not to be in that position again.”

For the moment he is secure in Temple Bar Studios, though tenure there is fixed and, as he knows, he has to plan ahead.