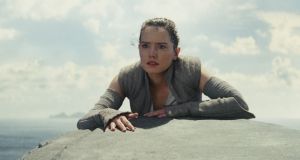 Let us begin on a merry note. Unequivocally justifying the decision to bring Star Wars to Skellig Michael, that outcrop’s performance outclasses those by many other, more metaphorical piles of inexpressive stone in this often-underwhelming eighth episode. It is all over the film. So, you need prepare no terrible puns for complaints to The Irish Times letters page.

The film-makers have noticed the puffins and, in their honour, created the adorable porgs – orange and white semi-birds – to charm Chewbacca and provide yet more merchandising opportunities. We see it in gloom. We see it from within. We note that the Millennium Falcon has covered parts of it. Go, Star Wars Island.

What goes on there, however, exemplifies what’s wrong with the surrounding superstructure. As you will recall from the last part, Rey (Daisy Ridley) has arrived on the damp planet Ahch-To intent on luring Luke Skywalker (Mark Hamill) back into the action. His very first reaction takes in an excellent joke that (along with an adjacent one involving Domhnall Gleeson and Oscar Isaac) suggests Star Wars may be prepared to take the intergalactic Mickey out of itself. Not so much.

For the first half of a punishingly long film, we repeatedly cut back to Star Wars Island where Rey is begging Luke to train her as a Jedi. He speaks in the sort of self-help baloney that Harrison Ford famously described as “sh*t” to George Lucas.

Rey’s allusions to family mysteries remind us that many Star Wars episodes could be comfortably retitled: “Who’s your Daddy?” The Force is explored with a po-faced solemnity that few films now bring to the investigation of any genuine belief systems. It’s more boring than being in church.

Put simply, The Last Jedi is lodged several parsecs up its own black hole. George Lucas’s Star Wars (that’s what the film was called) was awash with influences from myth, legend and cheap space opera. The Force Awakens held close to the first film’s template, but generated modest interest by dangling new variations on the old characters. This time round, those characters are allowed insufficient development to distract from the suffocating self-awareness.

Adam Driver, miscast as the now-scarred Kylo Ren, continues to suggest an evil organic cheesemonger from the southern reaches of Brooklyn. At the too-red court of the Supreme Leader Snoke – set-dressed like an avant garde 1980s production of Macbeth – Ren fumes his way towards the sort of plot revelations that, because they’re so wired into the Star Wars universe, fail to generate more than an Alan Partridge shrug.

Everything over here is answering a question on some arcane aspect of the franchise’s half-cocked lore. Everything over there is asking other questions that may get answered in a future episode. Nobody has time to knock together a lucid story.

This is not to suggest that things don’t happen. With an agreeable new character named Rose (Kelly Marie Tran) in tow, Finn (John Boyega) travels to a madly heightened version of Monte Carlo – scarcely more vulgar than the real thing – in search of a code-breaker who can do something or other. Laura Dern serves time as a charismatic admiral forced to make many of the usual painful decisions. The late Carrie Fisher is on set as a poignantly muted version of the once irrepressible Leia Organa.

It is only fair to acknowledge that, for those who require such things, this stuff will fill a yawning Star Wars-shaped hole. The film-makers can call on John Williams to flavour the material with his characteristic post-Wagnerian bombast. That old trooper gets to work through some effective Star Jazz in the scenes on the Planet Monaco (as I’m pretty sure it’s not called). Even casual Star Wars observers will rejoice at seeing those giant walker things making their way towards a face-off with destiny. Moreover, many of the tweaks to the universe are welcome: how pleasing that, once white suburbia in space, the series now accommodates so many Earth cultures.

But there’s just too much fudge. Few of the many plots find momentum. Not until the final, tolerably cathartic denouement does it seem clear what the film is actually about. Oh, for a Roger Corman to gouge out the pretentious waffle. Oh, for a Howard Hawks to hone the unfocused relationships. I’m still unsure as to who’s supposed to be in love with whom.

Never mind. It will almost certainly become the fourth-highest grossing film of all time. Who cares if some find the space opera as boring as, well, opera opera?