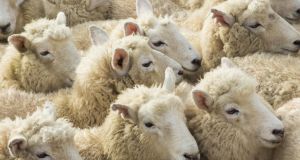 Baa’d education: William Deresiewicz identifies a slavish acceptance of market values as the rot at the heart of the US’s top universities. Photograph: Thinkstock

Former Yale professor William Deresiewicz has sparked an fiery debate in the US about the point of higher education.

His essay Don’t Send Your Kid to the Ivy League was the most-read article in the history of the New Republic magazine, and he has followed it up with a book, Excellent Sheep: The Miseducation of the American Elite, which identifies a slavish acceptance of market values as the rot at the heart of the US’s top universities.

His claim that universities are places for “building a soul” as well as teaching and learning has drawn strong rebuttal from the cognitive scientist Steven Pinker. “Perhaps I am emblematic of everything that is wrong with elite American education,” says Pinker drily, “but I have no idea how to get my students to build a self or become a soul.”

Deresiewicz, an English lecturer who left Yale to become a writer, likens today’s elite students to “a race of bionic hamsters”, technically gifted and efficient but highly risk-averse and typically stressed. He warns against the influence of “tiger moms” and the “practicality police”, and provides today’s countercultural idea: “An undergraduate experience devoted exclusively to career preparation is four years largely wasted.”

What are universities for?

“I thought [New York Times columnist] David Brooks broke it down pretty well in terms of universities having three functions or missions: the cognitive one, the practical one; and the one which I emphasise, the moral one. And I think there is no reason why a university can’t serve all three purposes.”

But why does the ‘soul-building’ onus fall on universities? Are you saying that if questions about values aren’t asked in universities, they probably won’t be asked anywhere in society?

“I am saying that, and there has probably been some high-brow sniffing at that idea. It’s not just that college is uniquely set up to help you do that, or should be, but it’s also the natural time of life to do that. It’s the first few years of young adulthood; you haven’t been engulfed by career yet.

“I think these questions naturally come to kids unless the environment suppresses them, which I’m afraid in many of the universities in the US it does.”

You invoke Socrates’s idea of teaching as the ‘re-education of desire’. What sort of desires should young people have?

“What I’m saying is, if you do a deep search of your soul and realise what you want out of life is to be as rich as you possibly can, then you should probably go and work on Wall Street. Obviously I’m also saying there is a whole universe of non-material desires that universities should encourage students to at least consider.

“I do also believe – and the leading research universities would outright reject this notion – that universities should in some sense be countercultural. Not in the 1960s sense, but as custodians of different values.

“I see this in Pinker’s scoffing at the notion of building a soul. He is a research professor. And a lot of this, at least in America, is a conflict between the English college heritage and the German research university heritage.

“What Pinker is talking about is the university part; so you create knowledge and that’s a great thing. Of course, really what you’re doing is creating knowledge for the market. That’s not a value-neutral activity. So if you just think in terms of creating knowledge, you can’t talk about any values except that one, which really isn’t relevant to a student unless they become an academic.”

What advice would you offer a student starting college?

“Don’t worry about continuing to compete with your peers, or accumulating as many credentials and gold stars as possible. The other thing is: don’t think about starting at point A and getting to point B. I know parents want their kids to make a living, and young people want to make a return on their investment, but success in career terms depends on doing something that you care about.”

Someone else you quote in the book is Stephen Dedalus from A Portrait of the Artist as a Young Man. Do you count him as a role model?

“I think I would be afraid to admit just how much of a role model he has been to me because it would make me sound like too much of a cliche. When I was in college, it was probably more important than any other book I’d ever read.

“I know this is romantic youth, and I know Joyce ‘ironises’ it, but what do we want? Do we want kids who are sitting there reading The Economist when they are sophomores in college?”

You’re not a great fan of people studying economics. Why so?

“It has become the default option. I think computer science is now breathing down its neck. B