Oscars 2020: Who will be nominated today, and who will win?

Saoirse Ronan should get a nod for Little Women. There are few other options for the Irish 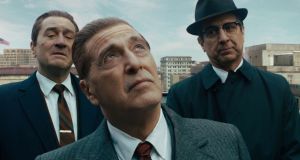 Martin Scorsese’s The Irishman: Still a contender in Best Picture.

This year’s Oscar nominations will be announced on Monday, January 13th, starting at 1.18pm Irish time, or 5.18am in Los Angeles.

The good news is that, as was the case a year ago, we still have little idea what is going to win best picture. In an unusually concertinaed season – following the pulling back of the ceremony by three weeks – we can, however, say with some confidence what the nominees will be for that prize.

The films listed below were the 10 nominees for the Producer’s Guild of America awards. It’s hard to see anything else sneaking in. Sadly, Lulu Wang’s The Farewell has registered with few other awards bodies. The Two Popes seems to be scoring only in performance categories.

Wrapping ourselves in the flag, we conclude that there are few options for Irish nominees. Saoirse Ronan should just about make it in for Little Women. The Academy’s notion that “best cinematography” really means “most cinematography” probably rules out Robbie Ryan’s superb work on Marriage Story.

As ever, if I get less than 80 per cent correct, I will appear in the town square to have my epaulettes ripped from my shoulders. The potential nominees are listed in order of likelihood.

Between five and 10 will be nominated.

Once Upon a Time in… Hollywood
The only major guild nomination Quentin Tarantino’s 1960s epic failed to score was the Writers Guild of America. And it wasn’t eligible for that. So it’s in. Could very easily win. They love QT.

The Irishman
Scored with the PGA, the WGA, Screen Actors Guild and the Directors Guild of America. Scorsese’s thoughtful gangster flick didn’t win a thing at the Globes, but almost certainly came close in best drama. Still a contender.

1917
Released late in the year, Sam Mendes’s first World War drama has picked up momentum extraordinarily quickly. Big winner at the Globes. Sure to compete.

Marriage Story
Noah Baumbach has never much troubled the Academy, but his serious comedy (or perhaps comic drama) about the breakup of a bohemian marriage has really connected with audiences.

Parasite
What a delight to see Bong Joon Ho’s breakneck farce hold up in awards season. The Korean flick would be first ever winner in a language other than English (take that Japan, France, Italy…). That may be a stretch, but a miraculous performance nonetheless.

Joker
Todd Phillips’s DC origin story would be the first film to win best picture without a DGA nomination since Driving Miss Daisy 30 years ago. It makes people angry, but it’s not quite so divisive among critics as…

Jojo Rabbit
Only one winner of the People’s Choice at Toronto has failed to get a best picture nomination in the last decade. But none has so spilt reviewers. Some really, really hate the “anti-hate satire”. Unlikely to win anything.

Vulnerable, but it should just make it in. The film has done well with critics and audiences, but the familiarity of the tale counts against it.

If there are more than eight: commercial hits Le Mans ‘66 and Knives Out feel like the next two.

The first four seem certain and each is a plausible winner. The DGA gave the fifth spot to Taika Waititi. Todd Phillips also has a chance for Joker, but fears about excluding women - and affection for the film, of course - should see Greta home.

Tricky one. Phoenix and Driver are in, and Phoenix is probably winning. Banderas seemed certain before stumbling at Bafta. He’s probably still there and the OUATIH wave should sweep DiCaprio forward. The fifth slot could go anywhere. Ask us another day and we might have picked Jonathan Pryce for the Two Popes or Christian Bale for Le Mans ‘66. (Oddly, De Niro has got nothing anywhere for The Irishman.)

We know that Zellweger is probably winning for her performance as Judy Garland and that Scarlett is her only serious competitor. Theron, much liked, should get in for her borderline stunt turn as Megyn Kelly. Four actors are battling for the remaining two places: those named here plus Cynthia Erivo (Harriet) and Lupita Nyong’o (Us). In other words, national mourning at Ronan’s exclusion is a real possibility.

Oh man, this one is hard. Dern, the favourite, does a lot with a slight role in Marriage Story. Robbie is a star. Lopez can become the comeback kid. Anything could then happen. Scar-Jo (Jojo Rabbit) could go from no Oscar nominations to two in the same year. Annete Bening (The Report) is right there. But I’m naively trusting they’ll recognise first-rate supporting turns by Zhao and Pugh.

Category fraud alert! The folk at Sony have decided that Pitt, obviously a co-lead, is campaigning in supporting. The Academy will oblige and he will probably beat out a deserving turn by Pacino. No fair. Despite what the poster may suggest, Hanks’s role as Mr Rogers really is a supporting performance. We think Song will just edge out Anthony Hopkins for The Two Popes.

A rare category this year with no obvious favourite. The folk behind the well-written A Beautiful Day in the Neighbourhood will feel they are in with a chance, but best picture nominees always have the edge. Which is why we reluctantly favour Joker and Jojo Rabbit.

Could 1917 win best picture without a screenplay nomination? It’s happened before. The top three are surely safe. The other two are slippery. Knives Out should profit from its healthy box office. The Farewell, despite a slide at awards season, will surely hang on here. The unluckiest loser may be Pedro Almodóvar’s Pain and Glory.

Not the best year for mainstream animation, but, alas, few international features have properly competed with the studio fare. The one exception is I Lost My Body. The lovely French film, winner of Critics Week at Cannes, will be there, but is unlikely to do enough to condemn all-powerful Disney to a shut-out (still, you never know).

For decades it looked as if Roger Deakins might never win an Oscar. Two years after triumphing for Blade Runner 2049, he seems certain to take a second for his pseudo-single take on 1917. We’re crossing our fingers that Jarin Blaschke will sneak in for his imaginative work with vintage equipment on the extraordinary The Lighthouse.

Amazingly, Parasite, the undoubted winner, will also be the first ever Korean film to receive a nomination in what was, until this year, the Oscar for best foreign language film. There is already a longlist of 10, but voting is so erratic in this race it’s still a toss-up once you get past the top two. Beanpole from Russia deserves to contend, but could get left out altogether.