Unthinkable: Meaning can be found in everything from a loving relationship to playing chess, says philosopher Jonathan Rowson 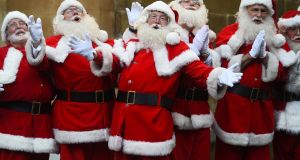 ‘What Christmas means is that, in our own bizarrely human way, we are caught up in an outbreak of mattering.’ Photograph: Kirsty O’Connor/PA Wire

It’s not just French intellectuals sipping coffee in Parisian cafes who agonise over life’s meaning. While commonly associated with Jean-Paul Sartre and his coterie of friends writing in the shadow of the second World War, existentialism is a way of thought – as much a mood as a philosophy – that can hit us all.

If you’ve ever asked “What’s the point?” then you’re an existentialist. And, importantly, for Sartre and like-minded humanists, there is no “the meaning of life” waiting to be discovered. Rather, meaning in life is built over time.

This gives humans a kind of radical freedom but, on the flip side, deep anxiety. How do you know you’re living a life that matters? Should you spend your life, for example, doing charitable works, making money or playing chess?

Jonathan Rowson throws himself into this field of inquiry in a new book, The Moves That Matter: A Chess Grandmaster on the Game of Life. Rowson (42) is indeed a grandmaster, having won the British chess championship in three consecutive years, but he is also an applied philosopher with an interest in research on spirituality.

For him, chess acts as a companion or guide which teaches you, among other things, how to deal with loss, how to concentrate and how to appreciate human imperfections, including your own.

Even if you’re not convinced of the need to take up chess, you’ll find it hard to disagree with his conclusion that life is enriched by commitment to a cause. “Whether through work or love or art, life becomes more meaningful whenever we take responsibility for something or someone,” says Rowson, today’s Unthinkable guest.

Jonathan Rowson: “I say in the book that chess is just a game in the way the heart is just a muscle. Chess matters because the game’s unique combination of global heritage, beguiling depth, strategic resonance and aesthetic charm makes it both a game and much more than a game.

“It matters to players through their experience of meaning during play and to society as a metaphorical touchstone. It matters because taking proper responsibility for our lives requires facing up the fact that we will die; and while chess is fun, it is also a sublimated encounter with death, where it is our responsibility to stay alive one move at a time.

“It also matters because chess ideas are beautiful, and chess concentration has a distinctive flavour of intrinsic cultural value with notes of abstraction, truth, resistance, and a little flutter of intimacy. Players are implicated in this swirl of significance, which makes us feel intensely alive.

“On the other hand, it really is just a game. Nobody gets physically hurt, and nothing can matter that much when the next game is not far away.”

Has your exploration of the issue led to you a better understanding of how to measure meaningfulness?

“Meaning is more or less palpable, but perhaps not measurable as such. The experience of meaning arises when a relationship becomes aware of itself. The locus of meaning is not in us or in the world, but on the inside of that relationship – a place called consciousness.

“Relatedly, the meaning of the answers life offers us depends on the quality of the questions we are asking. Chess offers us that direct encounter with the relationship between mind and world for several hours at a time. We are constantly wondering: ‘What if I do this?’ and inhabiting that question/answer relationship is intensely rewarding.”

You go on to say “It’s the mattering that matters”. What are you getting at there?

“Meaning is mostly made, not found, and competition is the social construction of mattering. Consider any major sporting contest, and how we pause for the national anthems, cheer the players on, and eagerly follow the camera as it cuts to the face-painted fans singing songs in the crowd. We experience meaning by becoming part of the mattering that matters, not by explaining it.”

There are lots of mini-theses and philosophical vignettes in the book. One that particularly caught my attention was on the nature of sacrifice and the commercialisation of religious festivals. Can you explain how chess teaches us something about the Easter message?

“It’s about the taking the idea of sacrifice seriously. Whatever you think of its historical or theological validity, the Easter story is the epitome of this idea of sacrifice, emptying ourselves to be filled with something else; to lose our lives as we know them to live in a qualitatively different way.

“Chess games are always played, figuratively, on Easter Saturday, because we willingly enter a time suspended between despair and hope. And when we sacrifice our pieces there is risk involved; an act of faith akin to waiting for Easter Sunday.”

In your wider work as a philosopher you explore this interplay between spirituality and society. I can’t let you go without asking you the seasonal question: What is the meaning of Christmas?

“I’m tempted to say: just enjoy it! The meaning lies in the gratitude for the joy. But since you asked, the heightened consumerist frenzy of Christmas is an attempt to make real something that we feel should be real. As the lights come on and carols kick off, we know we should be living more deeply, not just now but always; yet we struggle to find cultural resources to adequately respond to that feeling.

“So when you look at people queuing up to buy toiletry gift bags for recently remembered cousins, when you remember that turkey is typically chewy and tasteless, and you really don’t want your grandmother to dress up as Santa again, have some sympathy. What Christmas means is that, in our own bizarrely human way, we are caught up in an outbreak of mattering, and that always matters.”

Is there really a Santa Claus?