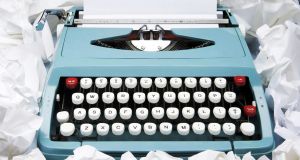 It was an out of body experience. Or so I thought at the time. There I was walking along a wet city street, unusually minding my own business, when my feet slid beneath me.

I fell flat of my back, my head reverberating off the pavement. Well, it felt like that. Initially the mortification was worse than the bang. Or so I thought.

Wondering whether I had split my skull, I opened my eyes to find three figures standing over me looking like those Famine sculptures by Rowan Gillespie on Dublin’s Custom House Quay.

I thought, “this could be heaven or this could be hell”. But it was hard to tell which. Then I felt maybe I had fallen through a dimension and on to the set of Michael Jackson’s 1983 Thriller video while being peered at by a trinity of what appeared to be some few undead.

I waited to hear the haunting voice of Vincent Price tell me “welcome to hell. Then it was always just a matter of time, in your case.” Instead of which a female said, “U, alroi mysta?” She lent down to help me up, but stumbled.

A male voice then said “U goh a roi ban on th hed ther.” It was then I realised I was in heaven. Or, rather, Dublin. Which can be heaven (because it rhymes with eleven. When you can have coffee and stroll down Stephen’s Green – according to the late actor Noel Purcell. )

“Stop this nonsense,” I announced to myself, realising my life had not passed before me so I was not dead, and hell would have to wait. I struggled to my feet, shaken but not stirred.

That was when I remembered it was Thursday and why my inquiring trinity were there.

Before the fall, I had just passed a methadone clinic upon which the hordes descend on that day every week, as they do at five other clinics in the city centre, before fanning out urbi et orbi, generally harmless but with vacant stares.

Not at all like: “And grizzly ghouls from every tomb

And though you fight to stay alive

Your body starts to shiver

For no mere mortal can resist

The evil of the thriller”

Thriller, from thrill, Old English þyrlian – to pierce (with emotion).