‘If you want to be an artist with a career, don’t have children’

A network, The Mothership Project, aims to develop supports for artists with children 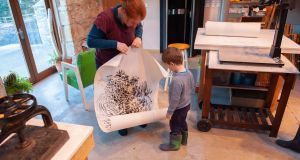 “Work in the Visual Arts is so badly paid in Ireland – the average annual income is between €10,000 and €15,000 a year – that it is especially tricky to sustain a career, because you can’t afford childcare.”

When Amanda Coogan was beginning to think about becoming a parent, the voice of her mentor, Marina Abramovic, kept coming to mind. “If you want to be an artist with an international career,” the performance artist urged, “don’t have children”.

When Coogan did choose to become a mother, she was confronted, as Abramovic predicted, with the complexity of compromises that parenting as an artist necessitated.

“Being a working mother is always tricky,” Coogan explains on the phone from Germany, where she has just launched a new exhibition at the prestigious Gallery Kunstkomplex. “But work in the Visual Arts is so badly paid in Ireland – the average annual income is between €10,000 and €15,000 a year – that it is especially tricky to sustain a career, because you can’t afford childcare.

Lack of flexible childcare was a serious obstacle, studio time was prohibitively expensive, and participating in traditional artist residencies was no longer a possibility

If you don’t have a good support network or an equal partnership in parenthood, as I did, it can be impossible to keep working at professional level.”

Coogan is just one of the artists involved with The Mothership Project, a network of artists who are also parents, who have dedicated themselves to campaigning for better practical support for artists who are trying to balance parenthood with professional practice.

The collective has been in operation since 2013, when founder-member Seoidín O’Sullivan sent an email to several parent-artist friends expressing her frustration about getting back to work.

O’Sullivan’s email touched a nerve, and a working group was quickly established, identifying a series of shared concerns. Lack of flexible childcare was a serious obstacle, studio time was prohibitively expensive, and participating in traditional artist residencies was no longer a possibility. The group began organising workshops, lectures and reading groups, with a view to finding proactive ways in which these particular challenges might be overcome.

In 2017, The Mothership Project – which is managed by O’Sullivan, along with artists Leah Hilliard, Michelle Browne and Tara Kennedy – were awarded a Project Grant by the Arts Council to develop a formal survey to find out what it is like to be a artist and parent in Ireland. What were conditions like across the country for artists who are also parenting? What changes might make a difference?

The results of the survey are published this week and they make for stark reading: 83 per cent of respondents were primary carers to their children as well as professional artists; 76 per cent turned down opportunities due to lack of childcare; 70 per cent did the majority of their artistic work after bedtime, between 9pm and 12am; and 70 per cent worked from a shared space in the home.

Multimedia artist Aideen Barry was one of those who completed the survey, and she has been navigating the challenges of parenting as an artist since before she began practising professionally. “I was a parent before I had a career,” she explains, “so in a way I didn’t experience the shock value that most of my peers with children would have. I had to learn to adapt very early and very quickly to the limited amount of time I had to work, and to use that limited amount of time optimally.”

Barry couldn’t afford childcare, so she worked (and still does) in the evenings, after her children were in bed. She couldn’t afford to rent a separate space, so her studio was (and is) the kitchen table.

For Barry, the result was that, “the material of motherhood was always present in my practice as an artist. The energy and madness of motherhood, the cultural conditioning of motherhood, the conflict between the roles of artist and mother: that was at the forefront of my thinking all the time and my creative approach too.”

The very infrastructure of the art world presented challenges to Barry as well. “The art world is just not family-friendly”, she says. “It is not a place for children.” The majority of arts events, which provide vital networking opportunities, take place at 6pm; dinnertime for most families.

Unable to participate in the culture, Barry says, “mothers become invisible, and if you are not visible you just don’t have the same opportunities.”

“There is this idea that artists are soothsayers,” she says by way of conclusion. “Living in some ivory tower, not connected to the real world, but they are very much part of the community.

They have families – young children and elderly parents – to care for. But they don’t have the same infrastructure of support that other working people do, and that needs to be reckoned with.”

As part of their Arts Council Project Grant, The Mothership Project attempted to take account for potential infrastructural change that might better support artists who are parents.

In partnership with Cowhouse Studios in Wexford, they piloted Ireland’s first family-friendly residency, which would accommodate the specific individual needs of 15 artists with children. The experimental residency offered onsite childcare, flexible studio terms, in-house catering and an option to have children involved in the residency itself.

The Mothership Residency provided a unique opportunity for him to immerse himself in a concentrated, goal-orientated project.

Ó hAodha became a parent while completing a Master’s degree at Glasgow School of Art, and it had an immediate impact upon his practice. Although his wife – who is also an artist – was the primary carer while he completed his studies, Ó hAodha noticed “a shift in my level of engagement with my work; it moved from a more emotionally-led approach to a more practical form of engagement”.

He became fascinated by this shift, and decided to use his dissertation project “to take account of it. There is this general myth that you can’t be a parent and be an artist, and I wanted to find out why.”

He concluded that it was “external conditions” that dictated this binary perception. Upon graduation, Ó hAodha became primary carer to his son, while his wife completed a prestigious commission, and his ability to practise professionally dwindled.

It wasn’t until the couple moved to Manchester, where they became eligible for 15 hours of free childcare, that Ó hAodha found the opportunity to work again in a structured fashion, and The Mothership Residency provided a unique opportunity for him to immerse himself in a concentrated, goal-orientated project.

“On a practical level,” Ó hAodha explains, “it was important that my whole family could come. My wife is an artist as well, and, even though she didn’t have studio time, she still had an opportunity to get some of her work done because of the childcare element.”

Crucially, Ó hAodha explains, “all domestic aspects that might stand in the way of your practice when you work from a home environment were taken care of too. That gave you a really good routine and rhythm: you just had to focus on work and family.”

The fact that there were other artists with children onsite was also significant: “you could see how other people negotiated the same challenges, and that was inspiring”.

What struck Ó hAodha most, however, was “how easy it was to access aspects of my artistic practice and identity that I thought were slipping away, once certain conditions were in place”. He was left wondering “how I could replicate that elsewhere in my professional life”.

With the impetus of The Mothership Project, it may not be long until the wider arts community provide greater support and opportunity for artists who are parents struggling to balance their practice with family responsibilities.

Coogan says “we need to support artists of all classes, ethnicities and identities, and that includes parents. The loss of the voice of mothers or fathers would be catastrophic. They may not be making work about parenthood, but they have a perspective that needs to be celebrated and seen.”

Ireland’s industrial heritage: the past you might not know we had
9