Irish theatre since 1950: what we remember – and what we have forgotten 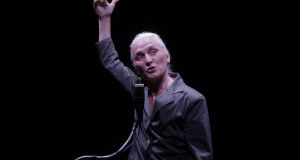 Picture the following scene. The Abbey Theatre is under attack for not producing enough plays by women. Detractors say that it’s out of touch with Irish life, that it’s not doing enough to bring new talent onto its stages, that change is long overdue.

The theatre responds by reviving a neglected Irish classic, Teresa Deevy’s Katie Roche - a 1936 play that explores the relationship between social class and gender in rural Ireland, and which feels as relevant to the present as the past. The critical reaction is positive: the Abbey has found a new way forward at last, it seems.

Readers familiar with recent Irish theatre will most likely identify this scenario as referring to the Abbey’s 2017 production of Deevy’s play. Programmed by its then new (but now under-fire) Artistic Directors Graham McLaren and Neil Murray, that version of Katie Roche was greeted with enthusiasm.

Not only was the Abbey producing work by an Irish woman on its main stage (something that had happened too rarely during the preceding decades), it was giving audiences the chance to see work by Caroline Byrne, an exciting young Irish director who had been successful at Shakespeare’s Globe in London but who was less well-known in Dublin.

Her production seemed an imaginative attempt to start addressing the inequalities in Irish theatre that had been identified when the #wakingthefeminists campaign began in 2015.

But, perhaps surprisingly, the above description of Katie Roche could just as easily apply to two other productions in the Abbey’s history, one from the 1990s and the other from the 1970s.

On both occasions, Katie Roche had been revived in response to criticism, and its production was seen as a signal of the Abbey’s intention to do things differently. In 1975, the success of Deevy’s play prompted the Abbey to draw up a shortlist of nineteen other women whose plays might merit production.

And a 1994 revival coincided with a special edition of Irish University Review that was dedicated to Deevy and other female dramatists from Ireland - the implication being that past inequalities were being set to rights, especially in the wake of the 1991 controversy about the omission of women from the Field Day Anthology of Irish Literature.

We thought we would change the world... But the world went back to its old tricks

But the transformative potential of those versions of the play was ultimately unrealized. The 19 playwrights on the 1975 shortlist never made it into production: indeed, only two plays by women appeared on the Abbey’s main stage during the subsequent 25 years (these were Jean Binnie’s Colours in 1988 and Marina Carr’s By the bog of Cats in 1998). And although much was achieved in the 1990s, the fact that the #wakingthefeminists movement was considered necessary tells its own story.

In 1993, for example, Caroline Williams and Katy Hayes had staged a festival of plays called There are No Irish Women Playwrights. The title was ironic, their aim being to raise awareness of both classic and contemporary plays by Irish women - and they succeeded brilliantly in disproving their own assertion.

Yet two decades later, the problem of neglect and discrimination persisted. "We thought we would change the world," said Hayes in 2014. "But the world went back to its old tricks".

When I began writing a book about Irish Drama and Theatre since 1950, it quickly became apparent to me that these kinds of patterns are ubiquitous. Irish theatre, I knew, had played a transformative role in our society - fighting inequality, combatting abuses of power, and creating space to imagine the possibility of peace in Northern Ireland, among many other achievements.

But what also became obvious was that, as Hayes had put it, the world often “went back to its old tricks”, that advances made by one generation frequently had to be fought for again by their successors. When viewed over a 70-year span, Irish theatre seemed to progress not in a straight line but in a series of waves - pushing Irish society to change for the better, only to be pushed back.

There were many examples of this phenomenon. Nowadays we rightly celebrate the role of Irish theatre in exposing how members of the clergy had subjected people in their care to physical, emotional and sexual abuse - something that has been bravely explored in work such as Anu Productions’ 2011 play Laundry. But we could do more to remember the work that came earlier.

There was Patricia Burke Brogan’s 1992 play Eclipsed, which focused on the Magdalene Laundries at a time when they were still in operation in Ireland. And in the 1960s there were plays such as Richard Johnson’s The Evidence I Shall Give and Mairead Ní Ghráda’s An Triail, both of which were well received when they demanded that Irish society do more to protect its most vulnerable citizens. Irish artists spent decades demanding that their country should acknowledge what was happening in such institutions - until they were finally listened to.

Other patterns persist. We tend to think that Irish theatre’s openness to international influences is a recent phenomenon - but our dramatic tradition has always been at its strongest when it’s been in conversation with developments abroad. The plays of Chekhov, for instance, were introduced to Ireland in a theatre run by Thomas MacDonagh and Joseph Plunkett, two leaders of the Easter Rising who saw no contradiction between patriotism and respect for international culture.

And in the 1950s, the theories and politics of Bertolt Brecht were regularly debated in the pages of the Irish Times - with the influence of those debates later discernible in the ‘second renaissance’ of Irish drama that emerged in the 1960s with Brian Friel and Tom Murphy.

For decades, Irish theatre has been enriched by people from other countries - by Deirdre O’Connell, who set up the Focus Theatre in 1967; by Patrick Mason, who won a Tony Award for directing Friel’s Dancing at Lughnasa; and by countless others.

In such a context, Robert Ballagh’s recent suggestion that the Abbey’s problems arise from the nationality of its directors seems all the more objectionable.

What is the Abbey’s place in the wider ecosystems of Irish and world theatre?

This is not to suggest that the history of Irish theatre is like Waiting for Godot writ large, with the same things happening repeatedly, ad nauseam. But paying attention to the patterns can point us towards ways of breaking them - or, when necessary, preserving them too.

A case in point is the recent debate about the Abbey’s role in hiring Ireland-based actors, a controversy that provokes undeniably serious questions. How can Irish art flourish if Irish artists are impoverished? How can the Abbey protect its legacy as a literary theatre of world importance? And what is the Abbey’s place in the wider ecosystems of Irish and world theatre?

But it’s apparent that the Abbey’s current woes are, at least in part, a result of trying to make too severe a break from the past - particularly in the theatre’s treatment of the Irish dramatic canon.

While no-one wants the Abbey to be run as a museum, the current directors have taken an unprecedented step in programming three seasons without staging plays by Sheridan, Goldsmith, Boucicault, Wilde, Shaw, Yeats, Synge, Gregory, O’Casey, Friel, Murphy, and most of the other dramatists who have made Irish theatre internationally significant.

This programming is the equivalent of running the Royal Shakespeare Company without ever staging Hamlet, Romeo and Juliet or Macbeth: it might look like a bold statement at first but it ultimately risks devaluing the plays that made the theatre great in the first place.

History shows that the Abbey has thrived when it’s blended an imaginative attitude to Irish classics with an openness to new work (including plays from other countries) - and there are good models from previous artistic directorates that could be re-imagined for our times.

Of course, it’s also worth noting that if the Abbey were staging more classic Irish plays, they’d have to hire more Irish actors. So it’s important to be reminded that some elements of our past are worth preserving.

But before we can preserve the past, we need to become aware of it - and as more information is found in the archives, it is becoming obvious that many stories from our theatrical past remain untold, that there is more work to be done by in understanding and celebrating the ways in which Irish theatre has made our country more tolerant, more peaceful, and more interesting. Many exciting discoveries lie ahead.

Many of those writers were unknown in 1975; most remain unknown now. But our lack of knowledge of them is one more pattern that we have the power to break.

Patrick Lonergan’s Irish Drama and Theatre since 1950 is available now from Bloomsbury.