Unthinkable: People can cause harm unwittingly through clumsiness or ignorance 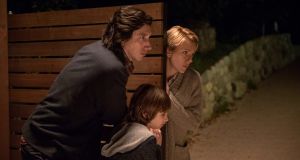 Sometimes no one is to blame: Adam Driver, Azhy Robertson and Scarlett Johansson in Marriage Story. Photograph: Heyday Films/Netflix

Not all harm is intentional. Sometimes we hurt others without meaning to.

A couple can fall out of love without either person wishing to damage the other, as the Oscar-nominated film Marriage Story poignantly shows. Who is to blamed for the anguish that follows?

Or think of a more mundane scenario. If I were to drive into a yellow box just before the lights changed to red. I had no intention of inconveniencing others by blocking the junction, but I end up doing just that. Do I deserve car horns of anger?

“There are situations that involve a person’s clumsiness or ignorance where he genuinely does not mean to harm, and is not aware of any risks posed by his ignorant or clumsy actions,” says UCD philosopher Dr Christopher Cowley. “We are tempted to blame him, but it is not clear what we are blaming them for.”

Cowley says the offender “might say ‘It never occurred to me’, to which we can only respond: ‘Well, it should have occurred to you’.”

This to-and-fro is a very familiar one, and to the harmed party it can seem like the offender is just making excuses. But Cowley – who is delivering a public lecture on the subject in Dublin next week – is more charitable in his analysis.

Promising to ‘love and honour’ someone ‘as long as ye both shall live’ is a huge commitment, precisely because I cannot know how I will change, how the other will change, and how the relationship itself will change

Reminding us that to err is human, he says people are “generally too quick to blame”. He explains further as this week’s Unthinkable guest:

Is ignorance a moral defence, whatever about a legal one?

“The medical profession has carefully defined what every medical school graduate should know, and should know how to do. There will, however, be borderline situations where two reasonable and well-intentioned parents will disagree about what each should have known.

“There is also a stock of shared general knowledge – for example, about human vulnerabilities, knowledge that everyone is expected to possess, and where ignorance, however genuine, can only reveal a deeper moral callousness or insensitivity.”

Does your responsibility change when you become an adult? More specifically, when you hit a certain age should you not only know the law and have an understanding of moral truths but also be aware of injustices around you to the extent that ignorance or indifference to them is blameworthy?

“In terms of knowledge of the law and moral truths, it is interesting that the age of criminal responsibility in Ireland is 12, which effectively means we expect a 12-year-old to know enough to avoid breaking the law. This seems much too young – but not as young as in England, where the age is 10.

“I’m not sure what it should be, but I don’t think it can be a single age. Different kids develop at different speeds, learn more in some contexts than in others, and so much depends on their home and neighbourhood and school environments. So I would be in favour of a much more flexible legal system, and much more integration with mental health and social services in trying to determine when ignorance is and is not an excuse.

“In terms of awareness of injustices around you, any decision to blame an individual for their ignorance has to take into account the realities of the power structures within which that individual lives, the limits of the individual’s alternative futures, and the lack of state resources to help.”

Should someone be blamed for having an incorrect opinion?

“Neither of these responses involve blame in the full sense, and people are generally too quick to blame; and too often blame turns into scorn and insult.

“However, dangerous opinions based more on hatred than on false information or weak arguments probably cannot be engaged with. One can only clamp down on them forcefully if one has the authority to do so, or walk away if one does not.”

This relates to a topic you’ve written about before: the interplay between knowledge and moral responsibility in our personal lives. Is it responsible to make an unconditional marital vow?

“I’ve been married for two decades, so of course I’m going to say yes! But promising to ‘love and honour’ someone ‘as long as ye both shall live’ is a huge commitment, precisely because I cannot know how I will change, how the other will change, and how the relationship itself will change – perhaps without anybody’s fault.

“It might be more responsible, in the face of such ignorance, to live with one’s beloved in a devoted, trusting and open-ended way, without any need for the blessing of the state or of a church. And that’s fine, I’m not saying this is better or worse than marriage. What is interesting is that, with these options, people can no longer drift into marriage as the default – those who choose to need a little more understanding of what they are doing and why.”

Was Socrates correct when he said no one does wrong willingly?

“I don’t know, to be honest. I have been very lucky in that I have never been seriously and deliberately wronged by anyone, and so I am more inclined to reach for different kinds of ignorance and clumsiness in trying to make sense of others’ wrongdoing. But those with direct experience of deliberate serious wrong – those who can feel the wrong, can feel the malice behind it – will be in a better place to criticise Socrates.

“One could still accept the Socratic claim, just as one could accept the Christian command to love one’s neighbour, as a powerful ideal to which we should all strive in our attempts to understand the world, however reasonable the temptation to despair when facing a single instance of deliberate wrong.”

* Dr Christopher Cowley is speaking on The Ethics of Ignorance and Clumsiness as part of the UCD public lecture series on ethics in public life at Newman House, Dublin, on Tuesday, February 18th, at 4pm. The series continues with Prof Rowland Stout on The Role of Empathy in our Moral Life on February 25th and Dr Silvia Panizza Topic on Paying Attention on March 24th. More details: https://www.eventbrite.ie/e/public-lectures-and-discussions-on-ethics-in-public-life-tickets-89767022581

* In another treat for philosophy fans, a free lunchtime lecture on The Three Aristotles of James Joyce will be delivered by Fran O’Rourke, UCD emeritus professor of philosophy, at the Royal Irish Academy on Wednesday, February 19th at 1pm.  It will be followed by a recital of Irish songs from the works of James Joyce with accompaniment by guitarist John Feeley. More information at: https://www.ria.ie/three-aristotles-james-joyce

Should you press “send” on a message in the heat of the moment?

Seneca replies: “Delay is the greatest remedy for anger.”

‘I knew she was loved’: Nick Grimshaw on Caroline Flack and mental health