Mike Murphy on Gay Byrne: Next thing you knew he had introduced sex to Ireland 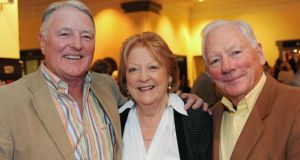 I didn’t know who he was at the time. He was 26 or so, tidily dressed, carrying a small box of records, walking briskly down the length of the Radio Éireann corridor in the GPO.

It was 1961 or thereabouts, and he had just presented a live 15-minute sponsored programme, Urneys or Prescott’s, on air. I was 20 or so, a neophyte, not sure who I was or where I was going.

Gay Byrne, I was told, was his name, and he was “going places”.

It was many years later he told me that, yes, the place he was going to on those specific days was the suburban home of his elocution teacher, a Miss Something-or-other, who had listened to his broadcast, and who now enacted a forensic assessment of his performance in her living room.

Boy, he took it seriously!

(Throughout the years that followed he raged against the “soft Irish ‘T’,” as he called it . . . “the pleece are looking onto itttttt” sort of thing.)

Terry with his stream of consciousness, verbal gymnastics full of literary references and Latin and Greek roots

He didn’t socialise much with us, his fellow comperes (a posh word for deejays). He was always too busy. He didn’t drink, nor curse (hence my utter agogment during the infamous Trinity College Candid Camera episode when he asked me did I “understand the expression f**k off?”).

He attended Mass regularly, and was generally as well-behaved as any ideal Irish Catholic boy could aspire to being.

Then came the Bishop and the Nightie.“ Christ Almighty,” exclaimed John Charles Mc Quaid, “What’s that little bastard up to?”

And the spell was broken.

Next thing you knew, he had introduced sex to Ireland.

It wasn’t that he was a revolutionary, it was just that he was curious, and he didn’t see why he shouldn’t ask awkward questions. He himself lived a quiet, somewhat sheltered, highly disciplined life, and he was genuinely curious about those who were a little off key.

When I announced live on air that I wouldn’t be returning with the Live Mike after four highly successful seasons, he was aghast. He came into my office on the Monday, visibly upset.

His secret weapon in adversity was, of course, that remarkable woman he had the foresight to marry – Kathleen Watkins

“You’ve destroyed your career. What were you thinking?” I told him I just wasn’t enjoying it any more. “ What’s that got to do with it? It’s your career!”

I often used to say that he ran The Late Late Show set-up like an insurance company. Staff were expected to be on time and not dally too long over lunch. But they loved him. He was utterly loyal to them, helped them in their personal lives, joined them for coffee after his radio show, and hosted an annual lunch at his home for both his radio and TV staff every Christmas . . . even when he was ill. They all turned up, loving it. And him.

Surprisingly, he was extraordinarily insecure. When on holidays in Donegal, he would listen religiously to his replacement on the radio (never yours truly, incidentally, I had resolved at the start to never, ever stand in for Gaybo). He worried his replacement would be better than him and that he’d lose the show.

Do we, as a nation, I wonder, fully appreciate that we gave the world two of the greatest broadcasters in history? Gay Byrne and Terry Wogan.

And how different the styles.

Terry with his stream of consciousness, verbal gymnastics full of literary references and Latin and Greek roots.

And Gay, the ultimate pro, who honed and rehearsed for hours before going on air. (He never used an autocue, choosing instead to memorise his script.)

We travelled a lot together over the past 20 years. While he enjoyed it, he wasn’t very adventurous. At breakfast he’d say “Alright, what are we doing today?”. He liked to leave the planning to others.

But he was wonderful company, enjoying being the butt of some of our jokes, even-tempered and generous. I remember he bought me a drink one day (okay, that’s a joke).

He hated hospitals. And funerals. When he got ill, I feared he might not be able to cope temperamentally with the setback. How wrong I was. He fought like a tiger. He went through hell and came back for more. He told me some time ago that his surgeon said to him, “You know, Gay, I’ve been treating you for over six months now and I’ve never seen you smile”. As he said to me, “I’ve nothing to smile about”.

His secret weapon in adversity was, of course, that remarkable woman he had the foresight to marry – Kathleen Watkins. Throughout the health ordeal she was no less than magnificent. His moods fluctuated, his suffering was heartbreaking, and she never faltered. Their daughters Crona and Suzy and their kin were also unwaveringly supportive.

And Kay insisted they go to functions and first nights when he could physically manage it. To lead as much as possible a normal life.

He truly wanted to go back on air. His life was predicated on broadcasting . . . his pockets full of little notes about books, movies, shows and anecdotes that he loved to relate to his listeners.

He adored being recognised and couldn’t understand why I had opted out.

That’s what he missed most. Being Gay Byrne.

That he was respected, admired and deeply loved by the public goes without saying. But he was deeply loved by us, his friends, too. He enhanced our lives and we cherished him, and we’re going to miss him dreadfully.

Sally Rooney’s Conversations with Friends to be filmed for BBC