Why have there been so few women elected in Ireland since 1918? 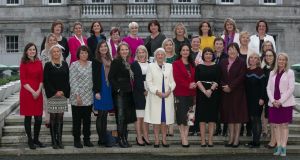 Past and present women TDs and ministers at Leinster House to mark the occasion of the first working meeting of the Irish Women’s Parliamentary Caucus in November 2017. Photograph: Gareth Chaney Collins

Constance Markievicz’s election in 1918, her subsequent appointment as minister for labour in the revolutionary first Dáil Éireann in 1919, and the extension of universal suffrage in 1922, did not usher in a golden age for women in Irish parliamentary politics. In the 100 years since women won the vote, only 114 individual women in total have been elected to the Dáil. Of the 4,575 Dáil seats available over 30 elections since 1922, women held 274 of them, just 6 per cent of the total.

In the old Northern Ireland House of Commons from 1921 to 1972, only 11 women were returned during its 51 years of operation. Dame Dehra Parker, who became minister for health and local government in Northern Ireland in 1949, was the only woman to hold a cabinet position in the Stormont Executive before 1972.

Various factors account for the scarcity of women in Irish parliamentary politics, especially in the early years after independence and partition. Many suffragists did not remain politically active. Others, such as Hanna Sheehy-Skeffington, preferred to continue their civil society campaigning.

Women were more predominant in the anti-Treaty side after the Sinn Féin split and abstained from the Dáil after the 1922 general election. As a result, more women were elected than took their seats, including Caitlín Brugha, Kathleen Lynn, Mary MacSwiney, Kathleen Clarke, Constance Markievicz and Kate O’Callaghan. At one stage, between 1927 and 1932, Margaret Collins-O’Driscoll (Cumann na nGaedheal), sister to Michael Collins, was the only female member of the Dáil.

Some women became politicians by accident. Mary Reynolds won a seat for Fine Gael in a by-election in Sligo-Leitrim in 1932, following the shooting dead of her TD husband Patrick Reynolds during the 1932 general election. Bridget Redmond succeeded her husband, Captain William Archer Redmond (John Redmond’s son), as a Fine Gael TD for Waterford, following his sudden death in 1932.

The women who were elected did not necessarily support women’s issues. Margaret Collins-O’Driscoll voted in favour of the 1929 Censorship of Publications Bill, which, among other provisions, banned information on birth control.

Supporters of women’s rights and equal opportunities came from Seanad members, in particular Jennie Wyse Power and Eileen Costello. Both opposed the 1925 Civil Service Regulation (Amendment) Bill, which sought to disbar women from taking examinations for senior civil-service positions. Power later opposed the 1927 Juries Bill, which removed from women the right of jury service. Power and Kathleen Clarke vigorously opposed the 1936 Conditions of Employment Act, under which women could be totally excluded from certain types of industrial employment.

An opportunity to increase women’s representation arose in 1936 when the Seanad was abolished. The Joint Committee of Women’s Societies and Social Workers seized the moment to advocate for equal representation. The committee proposed a requirement that at least one woman be on the ballot in every electoral area, believing women voters would “do the rest” as they were so keen to increase women’s presence in politics.

They also wanted senators elected on issues of healthcare, social welfare and primary education – arguing the representation of these areas would give women’s interests a voice in parliament, if not actual representation. Their petition was received in a lukewarm manner by the Commission on the Second House of the Oireachtas, and this early gender quota proposal was rejected.

In the 1970s, women again sought a voice and place in political life. The Women’s Progressive Association, later the Women’s Political Association, was founded by Margaret Waugh, Gemma Hussey, Monica Barnes, Audrey Conlon, Hilary Pratt, and others. Mary Robinson was the first president of the association. The WPA election slogan, “why not a woman”, resonated with the mood of the time, but was resisted by political parties. The WPA sought a gender balance of 40 per cent of either sex at all levels of decision-making – an ambition that has yet to be realised.

There was a 60-year gap before the Irish government had a second female minister after Markievicz, when Charles Haughey appointed Máire Geoghegan-Quinn as minister for the Gaeltacht in 1979. Eileen Desmond (Labour), Gemma Hussey (Fine Gael) and Mary O’Rourke (Fianna Fáil) also found themselves as the only women around the cabinet table during the 1980s. It took until 1992 before two women were appointed to serve in government at the same time, Máire Geoghegan-Quinn (Fianna Fáil) and Niamh Bhreathnach (Labour). In all, 19 women have held cabinet office since 1918, representing 10 per cent of all ministerial positions.

To this day, progress in women’s political representation is slow. It took until 1981 before the numbers of women TDs moved into double digits, when 11 women took their seats after the February 1981 election. By 2016, this had grown to 35 (22 per cent), compared to the UK House of Commons (32 per cent), the Portuguese Assembly (35 per cent) and the Belgian House of Representatives (38 per cent). In Northern Ireland, women comprised 30 per cent of MLAs.

The 2012 (Electoral Amendment) (Political Funding) Act helped increase women’s Dáil representation, from 25 TDs in 2011 to 35 in 2016. This Act requires parties to select at least 30 per cent of candidates of each sex, or suffer financial penalties. This is far from the equality envisaged by suffragists, but reflects some progress. The quota will rise to 40 per cent from 2023.

A century after suffrage, the goal of gender equality in the Dáil and Northern Ireland Assembly has advanced, but has not been achieved. The 2016 elections point to a defining moment, one that would have pleased the suffragists. Until equality is achieved, though, their work, and Irish democracy, remains unfinished.

Yvonne Galligan is professor of Comparative Politics and Director Equality, Diversity and Inclusion in Dublin Institute of Technology. Marie Coleman is a senior lecturer in Modern Irish History at Queen’s University Belfast