Why did only two women stand for election in 1918?

Vote 100: Confusion over whether women could stand for election resulted in just two female candidates in Ireland

Actor Fiona Shaw recites Eavan Boland's poem, ‘Our Future Will Become the Past of Other Women,’ as part of a celebration of 100 years of Irish Women’s Suffrage. Video: Royal Irish Academy 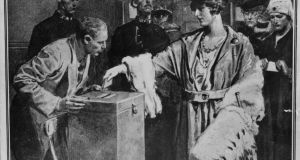 Women queuing to cast their votes for the first time in the 1918 general election. Photograph: Hulton Archive/Getty Images

“The political wiseacres are busy prophesying a General Election before Xmas. It will mean an anxious time for the party politicians of every school, for it will introduce a new and hitherto unknown force into the political arena – namely, the woman voter. What a perplexing problem for the seasoned manipulator of votes, for how can one be certain that the old wiles, the old cajolery, the well-worn platitudes of yesteryear, will beguile the woman voter? . . .

The “wild women” and the “sexless viragoes” of the militant era shall blossom into “ladies” endowed with the wisdom of Solomon and a monopoly of all the civic virtues. The anxious concern for the fate of the “home”, the condition of the family darning and the daily ablutions of the baby – problems which used to keep some of our public men awake of nights not so long ago, will vanish like a dream in the arduous work of capturing the woman’s vote.”

In 1917, as part of wider measures to extend suffrage to men, especially the younger generation of soldiers, the British parliament began debating the extension of the franchise to women. Including female enfranchisement within a wider package of electoral reform was widely recognised as the best chance of achieving the long-fought-for “votes for women”.

And so, on March 28th, 1917, after decades of opposition, the House of Commons voted overwhelmingly by 341 votes to 62 to grant the vote to women aged over 30 who were property owners, wives of property owners, or university graduates. But MPs rejected a proposal to grant women votes on the same terms as men, at the age of 21. Making women the majority of the electorate was deemed far too radical and risky.

There was some opposition from members of the Irish Parliamentary Party and the Irish County Councils General Council, who argued this matter should be postponed until it could be debated by an Irish parliament in Dublin. Luckily, that opposition was overcome and Irish women did gain the vote on the same terms as their British counterparts.

The general election of 1918 is remarkable for many reasons. The addition of a huge number of first-time women voters was to make this election historic. Moreover, because of the first World War, it was the first general election in more than eight years – one of the longest gaps in British or Irish constitutional history.

During the intervening period, there had been a demographic shift in the electorate. Not only was a whole generation of younger voters now going to the polls for the first time, but an older generation of voters had died off. This made the outcome less predictable. In Ireland, for example, the electorate had expanded from about 700,000 to two million.

Having opposed votes for women for decades, as Margaret Connery humorously described in the quote above from the Irish Citizen newspaper, politicians of every persuasion now chased the female vote. Women were in demand as canvassers and speakers at election rallies. Sinn Féin sought to mobilise women voters with the pamphlet “Save Ireland by voting as Mrs Pearse will vote”, and the promise that “as in the past, so in the future, the womenfolk of the Gael shall have high place in the council of a freed Gaelic nation”.

But there were some contradictions in its message. The Sinn Féin convention passed a resolution that no candidate should stand “other than a man who took part of the fight of Easter Week”. Indeed, there was some confusion about whether or not women could stand as candidates at all. For example, in an admirable, if somewhat uncharacteristic concern for British constitutional rules, Sinn Féin was not sure “whether it would be according to the law” for women to stand in the election.

In fact, the first party in Ireland to nominate a woman candidate was the Labour Party. It nominated Louie Bennett, the stalwart suffragist and trade union activist, but she declined. In the end, this was just as well, because the Labour Party later decided to step aside and give Sinn Féin a clear run in the election.

The confusion about women standing for election was widespread. In Britain, a few women stood for by-elections as a way of testing the law. Nina Boyle, a member of the Women’s Freedom League, attempted to get herself on a ballot in a Yorkshire by-election in April 1918.

With the election looming and growing confusion about women’s candidacy, parliament was forced to take action. In October 1918, the Liberal MP Herbert Samuel introduced a resolution to clarify the eligibility of women to stand as parliamentary candidates. Opponents argued it was too radical a move, as women had only just been enfranchised and that the boisterous culture of the House of Commons was not suitable for women. Nonetheless, and somewhat surprisingly, the resolution passed overwhelmingly and became law on the last day of the session, November 21st, 1918.

The one-page Parliament (Qualification of Women) Act, granted women the right to stand as candidates in the general election of December 1918. The suddenness and rather last-minute nature of this act led to a scurry of activity, as women tried to get themselves onto the ballot papers with only weeks until the election.

As a result, women’s candidacy was rushed and ill-prepared. The names of 17 women across Britain and Ireland now appeared on the ballot papers. But such was the rush to nominate women that some candidates were uncertain about whether they were to be included or not, including within Sinn Féin.

It had been assumed that women prisoners including Maud Gonne and Katherine Clarke would be included, but they were to be disappointed. Hanna Sheehy-Skeffington also expected to be nominated, but she was offered an unwinnable seat and declined to stand. Winifred Carney agreed to stand in Belfast, though this was also widely regarded as unwinnable.

In the end, only Constance Markievicz had any real chance of success in St Patrick’s Ward in Dublin.

Having nominated women, it has been argued that Sinn Féin did not adequately resource and support their candidacy. Hanna Sheehy-Skeffington and other suffragists felt frustrated as they worked tirelessly to support the two women candidates. Sheehy-Skeffington and Margaret Connery, for example, organised numerous meetings and rallies, gave speeches and put up posters. Old tensions between suffragists and Cumann na mBan resurfaced as they argued about how the candidates should be supported, given the very tight time-frame and limited funds.

Although we cannot know how women voted, historian Elaine Callinan suggests that turnout among first female voters seemed to be high, judging by newspaper reports of the time. Given the results, it is likely that women, at least in southern Ireland, voted in large numbers for Sinn Féin, who swept to power with a landslide victory.

Although this election was momentous, not only for women voters but also for women candidates, it was, as Margaret Connery concluded in her Irish Citizen article, just one “milestone on the road to freedom”.

One hundred years on, with women still in the minority in most governments worldwide, we have yet to achieve the full and equal parliamentary representation for which suffragists so courageously fought.

Louise Ryan is professor of sociology at the University of Sheffield, and author of Winning the Vote for Women (Four Courts Press, 2018).