What did the early Irish sound like? Researchers hope to find out 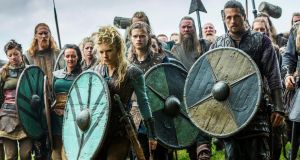 TV shows such as Vikings captivate modern audiences, but history does not record exactly what Vikings sounded like

Vikings are well known for helmets, swords and longboats, and they must have made a racket when raiding settlements, but history does not quite record what they sounded like. The centuries cast a hush over their conversations, poems, songs and music.

That may soon change, because a pioneering research project aims to breathe life into the sounds of early medieval languages, including Old Norse and Early Irish.

Royal Birmingham Conservatoire, part of Birmingham City University, and the composer Edmund Hunt are to lead an effort to fuse music and historic linguistics to examine the sonic footprints of Vikings and Celts.

TV shows such as Vikings and The Last Kingdom, as well as JRR Tolkien’s fantasy world, populate the visual imagination,  ‘but what do we really know about the sounds accompanying all this imagery?’

“The question is can we bring back some of the performative power, the intimacy, of those voices? Can we bring them back to life?” Lamberto Coccioli, the project lead and associate principal of Royal Birmingham Conservatoire, says.

His team will collaborate with three European contemporary-music ensembles – Hard Rain SoloistEnsemble, from Belfast, is one of them – and Cambridge University’s department of Anglo-Saxon, Norse and Celtic. The UK Arts and Humanities Research Council has just awarded £485,274 – more than €535,000 – to the two-year project, which starts in November.

TV shows such as Vikings and The Last Kingdom, as well as JRR Tolkien’s fantasy world, populate the visual imagination, says Coccioli. “But what do we really know about the sounds accompanying all this imagery?”

The project was inspired in part by Hunt’s mix of specialities; the composer has a degree in linguistics and Anglo-Saxon literature. The goal is to produce musical compositions, public concerts, conference presentations, a digital audio database and a sample library.

Archaeologists have found evidence of musical instruments dating back to the Iron Age, including horns, pan pipes, flutes and lyres, but Vikings and early Celts left scant written record of their tunes.

Scholars are confident they know what Vikings and Celts sounded like by tracing the evolution of language and pronunciation, says Coccioli. “The knowledge is there, but it’s academic knowledge and not used in artistic practice. We thought we might be able to take the source material for new compositions, not just [re-create] the raw sounds.”

Here, Gaelscoileanna are popular in cities, but only 1.7 per cent of the population speak Irish daily. Icelandic, which has changed little since Viking times, is being eroded by tourism and TV

The modern versions of Early Irish and Old Norse face uncertain fates. Without radical action Scots Gaelic will be dead within a decade, according to a recent study. Here, Gaelscoileanna are popular in cities, but only 1.7 per cent of the population speak Irish daily. Icelandic, which has changed little since Viking times, is being eroded by tourism and TV.

Darach Ó Séaghdha, the Irish-language activist, podcaster and author of Motherfoclóir: Dispatches from a Not So Dead Language, welcomes the project as an innovative initiative that could fuel linguistic curiosity and enthusiasm.

Technology is boosting revival efforts, he says, citing Kevin Scannell, an American academic who last year obtained a scholarship to develop an Irish-language Siri- or Alexa-style virtual assistant, and abair.ie, a project by the phonetics and speech laboratory at Trinity College Dublin that develops synthetic voices for Irish.

“Various agencies and academics are doing great work – hyperlink dictionaries with audio pronunciation, grammar wizards, things that are now at your fingertips. And social media has helped Irish speakers find each other.” – Guardian