Oscar Wilde’s wit and ego on display in €50,000 auction sale

According to book, his preferred poets were ‘Euripides, Keats, Theocritus and myself’ 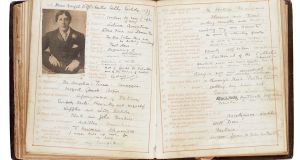 A rare document handwritten by a young Oscar Wilde, in which he declared his desire for fame “or even notoriety”, has sold at auction for more than €50,000.

“There are only two tragedies in life: one is not getting what one wants, and the other is getting it,” he famously quipped.

It was the latter tragedy that befell the writer, according to the questionnaire he filled in while still an undergraduate at Oxford.

Yet to have published a book but on the cusp of stardom, the young Dubliner, still in his early 20s, was asked 39 personal questions for an album of “Mental Photographs” in 1877.

To the final question – What is your aim in life? – Wilde responded: “Success: fame or even notoriety.”

Signed with his full name, Oscar Fingal O’Flahertie Wills Wilde, the document draws opinions both pedestrian and profound – from his favourite perfume (almond blossom) to the saddest word (failure).

His trademark wit is on display. Asked what book to take up for an hour, he replies: “I never take up books for an hour.”

His bête noire, he records, is a “thorough Irish Protestant” while if he could be anyone else it would be a “cardinal of the Catholic Church. ”

“Asceticism and ambition” are the most sublime passions, while the “power of attracting friends” is his favoured trait in a man.

Wilde’s idea of happiness was “absolute power over men’s minds, even if accompanied by chronic toothache”, while misery would be “living a poor and respectable life in an obscure village”.

And, of course, there is his ego. Pressed on his preferred poets, he boasts: “Euripides, Keats, Theocritus and myself.”

The questionnaire – which fetched £47,800 (€53,000) under the hammer at Sotheby’s in London during the week – was put up for sale by actor and director Steven Berkoff, who began collecting Wilde material after directing the writer’s tragedy Salome, which premiered at The Gate in 1988.

“It’s impossible not to be touched by the terrifying story of Oscar Wilde’s life,” he said. “I have been lucky enough to own this slice of personal Wildean history for many years, and hope that the next owner takes as much enjoyment from the album as I have.”

Dr Philip Errington of Sotheby’s said the questionnaire was probably filled in for an admiring fan of Wilde, who had built up a following by the late 1870s. The auction house would not comment on the identity of the new owner.