Strong women, wealth and a boat disaster: The remarkable history of one Dublin building 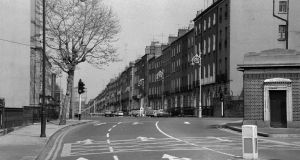 A view of Fitzwilliam Place, Dublin 2.

One of the pleasures of an old house is its ghosts. Not the haunted variety, but a consciousness of lives lived within walls that have seen much. Such buildings are not just architecturally significant, but the spaces where previous generations experienced pleasure and pain, hardship and happiness. These are buildings which had to function as a contemporary home, or earn their commercial crust.

So the worn-down granite step between entrance and hallway at 25 Fitzwilliam Place, off Leeson Street in Dublin 2, is testament to the many feet that have passed through its doors over 178 years.

This sense of history seems to inform Michael Kelly and his daughters Fiona, Rebecca and Clare Kelly. In 2003, Michael bought number 25 along with Fitzwilliam Hall behind it, which Bank of Ireland used for investment banking. He refurbished them, and then bought number 24 next door in 2008.

“The buildings have the same fireplaces, and likely feature the work of the same craftsmen and builders. They’re taller than other houses in the row, indicating they were built as a pair,” he says. Today, his company Glandore rents private offices and hot-desking at 24, and owns Suesey Street restaurant at basement level in number 26. Number 25 is an elegant venue, hosting weddings and corporate hospitality in its gracious rooms with original cornices and fireplaces.

As a grand house on Dublin’s Georgian Mile – which stretches from Leeson Street to Holles Street – it’s emblematic of its class and age, but also connected with the city’s life. Incidental details have offered an insight into the house’s history.

One evening in 2012, Catherine Hughes was dining at Suesey Street (then Brasserie Le Pont) and mentioned to Michael Kelly that she’d lived on the upper floors of number 25 from the 1960s to the ’80s. The chance meeting sparked interest, and the Kelly family decided to dig. With information and advice – from organisations ranging from the National Maritime Museum to the Royal College of Surgeons in Ireland – the Glandore team pieced the building’s past together, resulting in a handsome private book, A History of No 25 Fitzwilliam Place.

The book is a story of people rather than architecture, and was written by Niamh Callaghan, Mary Molloy and Sarah Terwilliger, with multiple photos, and illustrations by Joe Maher.

Various themes emerge in the account of the building, including strong women, lives of privilege and connections with the sea, business, medicine and sports.

The street was originally part of the Fitzwilliam estate, the large property haul accumulated by various Viscounts FitzWilliam from the 1300s. In the later decades of the 1700s, the seventh viscount, Richard Fitzwilliam, who lived in Richmond in London, was developing southeast Dublin city, including Merrion and Fitzwilliam Squares. He had no heir, and the book recounts how he decided which distant relative would inherit. Fitzwilliam invited both the fifth Earl Fitzwilliam from Yorkshire and the 11th Earl of Pembroke to tea, and observed. The Yorkshire man drank his tea from the saucer rather than the cup, and based on this, his prospects vamoosed.

So when Richard Fitzwilliam died in 1816, Pembroke, another English peer, inherited what became known as the Pembroke estate, the largest family-owned estate in Dublin. (It’s an amusing story, but hardly indicates great wisdom in decision-making by toffs with inherited wealth.)

The first occupants of 25 were William and Sarah Watson, who took out a 150-year lease (yearly rent £26 14s) on the site from 1841; the house appears in directories from 1843, and was a Watson family home for a number of decades. William and Sarah had six children. She encouraged them to read widely and made a happy and hospitable home. William Watson III was managing director of the City of Dublin Steam Packet Company (CoDSPCo) and a Commissioner of Irish Lights; he built two en-suites off the top-floor master bedroom so he could watch his ships sailing in and out of Dublin Bay – and check with his telescope whether his captains were on time (he was a stickler for punctuality).

One of their sons, Edward, seems to have had a cosy time of it at 25, and married their neighbour Adelaine Frances Courtney, who had lived at 24. It’s a serendipitous detail for what is now a wedding venue.

Edward and his older brother William IV were also in management in CoDSPCo, which transported messages between Ireland and England for the Royal Mail for many decades. Edward wrote a book about the development of the postal network, and was a director of the company at a turbulent time, when its RMS Leinster mailboat was sunk by German torpedoes in 1918. Some 569 died, in what is still the greatest loss of life on the Irish Sea.

The CoDSPCo connection didn’t continue into the next generation. Another Edward, the son of William IV, grew up in the house his grandfather first leased. He became a doctor – a radiologist at Sir Patrick Dun’s Hospital – and was involved in treating casualties from 1916. One obituary notes he was an outspoken and uncompromising imperialist.

His wife Ina Watson (née Read) was a successful golfer, becoming ladies’ captain in Malahide. She received an award from the Red Cross during the first World War. Sporting connections continued when her brother Henry “Harry” Marvelle Read – a former Irish international rugby scrum-half, IRFU president and Irish international in cricket and tennis – inherited number 25 after Edward’s death in 1947.

The house’s medical connections didn’t end with Edward’s death. Catherine Hughes, whose memories first sparked the interest of the latest family to own 25, recalls that when her own family moved there in 1960, the first and ground floors were rented as doctors’ surgeries.

No longer a home, nor a replica of its past, the building’s 21st-century commercial life still bears witness to its history, as one way of minding it. “Researching the house, we’ve come to an even greater appreciation of those who looked after it before us and we look forward to being the caretakers of number 25 for years to come,” says Fiona Kelly, now a Glandore director along with her sisters.