Rules of the game are still different for women politicians today 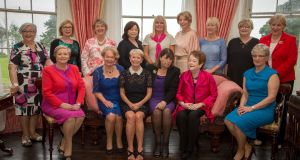 Constance Cassidy, centre, with a group of current and former female government ministers who gathered at Lissadell House in Sligo in July 2018, to commemorate the 89th anniversary of the death of Countess Markievicz. Photograph: James Connolly

Frances Fitzgerald, Jan O’Sullivan and Heather Humphreys are members of the exclusive club of 19 women who have served as senior Government Ministers since 1919. All three share something else in common – a belief they could not have reached the cabinet table when their children were in primary school.

A little over a year ago, I started interviewing the 17 surviving women who have attained cabinet positions for my book Madam Politician. I wanted to find out how they got to the top table of Irish political life. I was also curious to know if their experiences were different to those of their male counterparts.

What I quickly discovered is that their stories were similar to those of other women in the wider workplace. It just so happened that my book was based on women whose place of employment was Leinster House and Government Buildings.

Frances Fitzgerald was appointed to cabinet in 2011 when her children had grown up: “I think it’s close to impossible to combine the highest level of ministry with the kind of family life that I would want,” the former tánaiste said of a job that often involved 15 to 18 working hours.

Jan O’Sullivan was elected to the Dáil in 1998 when her daughter was in college and her son in secondary school. “I actually don’t believe I would have run for a national election when they were in primary school,” O’Sullivan admitted. Heather Humphreys had a similar view about arriving at the cabinet table when her children were teenagers. “I think that would have been a price too high for me [when they were younger],” she said.

The stories I heard from this group of 17 female politicians clearly illustrate how domestic commitments – and the related practical challenges of juggling family life – confront women as they ascend the political ladder.

Only 10 per cent of those who have held senior ministerial positions in the last century have been women, totalling just 19 female politicians. It is a regrettable and antiquated misconception to think they have not faced different challenges to their male counterparts. They may have had to fight the same fight in getting elected – and advancing their careers to ministerial rank – but the rules of the game are undoubtedly different.

Family pressures are augmented by issues such as a focus on their appearance and the ugliness of sexism. Over the past 40 years, Irish society and politics has been transformed. Ireland today is a different country to 1979 when the intervention of the minister for finance was needed to organise facilities for Máire Geoghegan-Quinn to breastfeed her young child when the then Fianna Fáil politician was a government minister.

In recent years, women have attained leadership positions – previously Mary Harney in the PDs and Joan Burton in Labour; today Mary Lou MacDonald in Sinn Féin and Catherine Murphy and Róisín Shortall in the Social Democrats. Yet, a woman has never led either of the two main parties.

When I spoke with Regina Doherty – a current Fine Gael minister – she referenced family considerations as one of the factors limiting her ambitions. “I look at Leo [Varadkar]and he works 6½ days a week. I looked at Enda Kenny beforehand, and he worked seven days a week. He would phone his children every evening. I mean, I wouldn’t be prepared to do that,” she told me.

Women politicians have also faced stereotyping in being appointed to the so-called “caring portfolios”. By the time Mary Hanafin was appointed minister for education in 2004, she succeeded three other women who had held the same role (Gemma Hussey, Mary O’Rourke and Niamh Breathnach). Two of Hanafin’s five successors in the job have been women. In all, of the 19 women to have sat at cabinet, six have been education minister, four women have been minister for health, while six have held the social welfare/social protection portfolio.

On the other side of the ledger, seven women have served in the economic brief that comes under the related departmental guises of business/enterprise/trade/innovation. But no woman has ever been appointed minister for finance or minister for defence or minister for foreign affairs. These are the last male ministerial outposts in Irish cabinet life.

I started writing Madam Politician and interviewing these senior female politicians as the scandals about harassment and abuse in the media and film industries and the world of politics, were first being reported. Some of these women experienced crude remarks and unacceptable behaviour as they sought to break the glass ceiling in Irish political life. They also faced public and media focus on their appearance.

This is a group of strong women with substantial professional achievements. Yet, what struck me was that they were only comfortable telling their stories now. Thankfully, more and more women are refusing to be silent about behaviour that is utterly unacceptable in any environment.

The Women’s Caucus in Leinster House has been advocating for a confidential survey to find out how prevalent these issues are in national politics. A timely endeavour and one of many that will hopefully do a service to women’s involvement in political life in the years ahead.