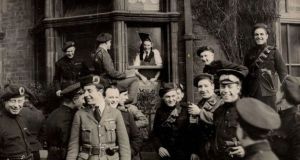 Members of the Auxillary Division of the Royal Irish Constabulary. This force was first conceived in 1919 as a cadre of British officers supporting the RIC against the IRA

The Royal Irish Constabulary (RIC) were the front line of the British government’s war against the IRA between 1919 and 1921. As a result, policemen made up by far the highest number of crown forces’ casualties. More than 400 were killed, almost double the number of army fatalities. British prime minister David Lloyd George had asserted that the conflict in Ireland was “a policeman’s job supported by the military and not vice versa”.

His reasoning was partly ideological, a refusal to accept republican claims to be engaged in a war, but also practical; imperial commitments meant regular troops were needed elsewhere. The poorly equipped IRA targeted the police initially because they possessed arms.

The 11,000-strong RIC, based in hundreds of barracks across the country, were also the most visible local symbols of British rule. Violence had been intensifying since 1917 and there were already several fatalities prior to January 1919. In 1918 two Kerry Volunteers were killed by police, and in revenge two constables shot and wounded in Tralee. In general, however, when Volunteers confronted police they usually disarmed and then released them.

While the Soloheadbeg shootings have attained iconic status as the start of the war, in reality conflict was episodic and localised until 1920. Nineteen policemen, including several Dublin detectives, were killed during 1919. A campaign of boycotting and social ostracism had a more severe impact on policemen and their families, and this, along with unease at government policy, saw more than 1,600 resignations from the force during 1920. Police were withdrawn from hundreds of small and vulnerable posts that spring.

From early 1920 the British government was already recruiting replacements in Britain, and over the next year the majority of new policemen in Ireland were actually British war veterans. These were the Black and Tans and the Auxiliaries, attracted by the prospect of high wages and adventure.

Some 178 policemen were killed during 1920 and almost 250 in the first six months of 1921. At least 150 of these were born outside Ireland, while a substantial number of the Irish policemen killed were also recent recruits. There were Irish “Tans” and “Auxies”, usually ex-servicemen. But many of the RIC dead were constables with long years of service, well known in the communities in which they were based. They tended to be Catholics from farming backgrounds.

Many policemen were targeted by the IRA while alone or in small groups, sometimes when off duty. In Dublin the IRA targeted Dublin Castle’s “G” Division but eschewed attacks on the unarmed Dublin Metropolitan Police. Constables had reacted to the IRA’s campaign with reprisals even before the arrival of the Tans. Cork’s Sinn Féin lord mayor Tomás MacCurtain had been shot in his home by disguised policemen in March 1920.

But the use of the new recruits as shock troops in the war against republicans produced a ruthless tit-for-tat struggle. Some of the most notable atrocities of the period, including Bloody Sunday and the burning of Cork, were carried out by men in RIC uniforms.

The police targeted prominent republicans as well as engaging in collective punishment of their communities, while the IRA often pursued individual officers in revenge for particular incidents.

Popular feelings regarding the campaign against the police remained complex.

Mayo IRA officer Richard Walsh suggested that “the RIC contained many decent men whose relations with the people generally were good. It also contained men who [were] most valuable for intelligence purposes . . . RIC men in many cases came from decent families, and the wholesale shooting of them would get a lot of our people up against us.”

But Walsh also suggested that “the shooting of RIC men during an operation was quite a different matter”.

With British rule fast losing legitimacy in Ireland after 1916, the IRA’s campaign against the police was explicable if not always popular among local communities.

The government’s brutal response to that campaign solidified support for republicans among the general population. Some have argued that the policemen who served in that period should be “honoured” in the forthcoming commemorations.

All those who died in that era deserve remembrance and, where possible, discussion of their motivations, in all their complexity. However, the primary role of the RIC during the War of Independence was to defend the British government’s refusal of self-determination to Ireland. “Honouring” men who fought against the formation of an independent Irish state is surely a commemorative step too far.