Democratic Programme set out the vision for a new Republic

Document adopted by first Dáil emphasised ‘liberty, equality and justice for all’ 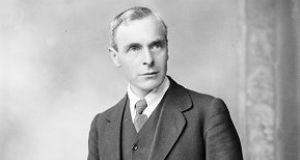 The Democratic Programme, one of four seminal documents adopted by the first Dáil, set out the vision for a new Republic upon which the War of Independence was fought.

The original version was drafted by Tom Johnson, secretary of the Labour Party, along with William O’Brien, president of the Trade Union Congress and Cathal O’Shannon of the Irish Transport and General Workers’ Union. However, it had been amended by Seán T O’Ceallaigh to delete any explicitly socialist content, on foot of the objections of Michael Collins and other senior IRB leaders.

These included clauses asserting the right of the country “to resume possession” of the nation’s wealth “whenever the trust is abused or the trustee fails to give faithful service” and a clause encouraging “the organisation of the people into trade unions and co-operative societies” as well the aim of “the elimination of the class in society which lives on the wealth produced by the workers of the nation but gives no useful service in return”.

Trade unionists featured prominently among the volunteers who fought

Nevertheless, it retained much of its egalitarian character, emphasising “liberty, equality and justice for all” and “the right of every citizen to an adequate share of the produce of the nation’s labour” as well as the affirmation “that all right to private property must be subordinated to the public right and welfare”.

The primacy of social obligation is clear from the declaration that it shall be the first duty of the government “to secure that no child shall suffer hunger or cold from lack of food clothing or shelter . . .”. Moreover, it specifically committed to “general and lasting improvement in the conditions under which the working classes live and labour”.

The key role of the Irish Labour Party and Trade Union Congress, (ILP&TUC), derived from the participation of James Connolly and the Irish Citizen Army in 1916, through the massive general strike in April 1918 which forced the British government to abandon its plans for the introduction of conscription in Ireland, to the decision not to field candidates in the impending general election in order to ensure a united front.

It also reflected the insight of the nationalist leaders of the IRB on the critical importance of organised Labour for success in any war for independence that might ensue.

The extent of the influence of “political” Labour can be discerned from the results of their first electoral test in the local elections of 1920. Labour gained 394 seats against 550 for Sinn Féin, 355 for the Unionists and 238 for the “Old Nationalists”. This is further reinforced by the fact that all 17 of the candidates fielded in the general election of June 16th, 1922, were elected.

Despite a century of 'independence', people still don’t have the right to collective bargaining at work

They also needed a formula to mobilise the “rank and file”. This required the effective promise of a better, fairer future, (which in the eyes of some of them at least, could be easily abandoned once the objective of national independence was attained). This trait in the character of nationalism was anticipated by Connolly in “Labour in Irish History”, published in 1910. There was no one better than Tom Johnson to craft the programme. Labour delivered handsomely.

Trade unionists featured prominently among the volunteers who fought. The ILP&TUC organised a campaign of passive resistance, particularly in relation to the movement of men and munitions, which effectively sabotaged the British war effort. Abroad, they won the recognition of Ireland as an independent state at the Socialist International in Berne in February 1919 – the first international institution to do so.

Now as we approach the second century since the establishment of the Free State, we can assess the degree to which the aspirations of the Democratic Programme have been realised. In the early years those who came into ascendancy, after a bloody brutal civil war, swiftly made their accommodation with the pre-existing economic order. While flags and emblems changed, material conditions for the great majority of the population deteriorated in a backward, impoverished, oppressive theocratic paradigm.

Arguably, things have improved latterly, despite boom and bust. Personal freedom has certainly been enhanced in seismic changes such as the marriage and Eighth Amendment referendums. Labour, The Workers’ Party and others on the left courageously campaigned for these for decades, before the thinking of those leading the various brands of nationalism “evolved” to happily coincide with the shift in public opinion.

However, on economic equality, the trend has been in the opposite direction, as homelessness, low pay and precarity, residual gender discrimination and other forms of deprivation stalk the landscape.

Despite a century of “independence”, people still don’t have the right to collective bargaining at work, which is key to ensuring “an adequate share of the nation’s wealth” and the “public right and welfare”, certainly does not prevail over the interests of private property.

However, every cloud has a silver lining. We now have the economic capacity to realise virtually all of the aspirations enshrined in the Democratic Programme and on an all-island basis too, but it requires political will to do it.