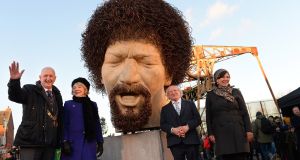 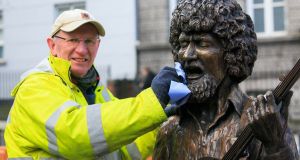 Sculptor John Coll puts the finishing touches to his Luke Kelly statue on South King Street, to mark the 35th anniversary of the death of the musician. Photo: Gareth Chaney/Collins

Luke Kelly’s version of A Town I Loved So Well is regarded as the definitive one though it was written about Derry and not his native Dublin.

The late singer who died 35 years ago on Wednesday at the age of just 44 would hardly recognise the place he loved so well, where he laughed through the smoke and the rain.

In the shadow of Sheriff Street there is now a giant two-metre high representation of his head by the artist Vera Klute. It seeks to capture the unique intensity Kelly brought to his singing. The eyes are shut and the mouth is open.

The statue, one of two unveiled in Kelly’s memory on the same day, stands at the junction of Guild Street and Sheriff Street.

This sculpture is now part of Dublin’s docklands. In Kelly’s day there was no Luas, no Convention Centre and none of the ziggurat-style apartment blocks that now overlook the location where he grew up.

The youthful Kelly, though, might still recognise the rusted orange swing bridge across the Royal Canal and the spire of St Laurence O’Toole’s church.

Hundreds of locals braved the cold conditions for the unveiling. It was back in 2004 that Cllr Christy Burke first proposed a statue to Luke Kelly. Lord Mayor Cllr Nial Ring raised a laugh when he said it only took 15 years – “not bad for the Corpo [Dublin Corporation]”.

The unveiling of both sculptures was done by President Michael D Higgins and his wife, Sabina. Ms Higgins knew Kelly in his days when she was an actor in the Focus Theatre and he was the singer with The Dubliners.

“Like so many of you, Sabina and I were proud to call ourselves friends of Luke Kelly, and to have had our lives enriched by his genius, his generosity, his good humour and his great sense of shared humanity,” the President said.

He went on to speak of Kelly’s working-class sensibilities which informed his socialist politics and his concern for the people he grew up with.

Luke Kelly, she said, was together somewhere in the great gig in the sky with his fellow Dubliners, Ronnie Drew, Barney McKenna and Ciaran Bourke. “They are all singing together and looking down on the town they loved so well,” she said.

She remembered “Uncle Luke” as a man who would bring strangers home for Christmas dinner and preferred a mug of his mother’s cabbage water to a pint of Guinness.

Watching it all from the sidelines was the only surviving Dubliner, the sage-like figure of John Sheahan who played a medley of the band’s songs with local schoolchildren, some of them wearing red wigs in honour of Kelly.

“It is an amazing piece of work. I think of them all every day, but in a nice way. I don’t bemoan that they all left. That’s part of life. He [Kelly] left us far too early, but he also left a rich legacy,” Sheahan said.

Earlier on Wednesday, 120 guest unveiled a sculpture at South King Street by the artist John Coll. The sculpture is a life-size bronze featuring Luke Kelly singing and playing a banjo.