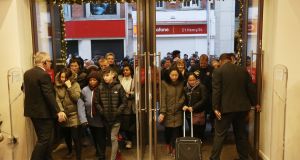 Eager shoppers enter Arnotts in Dublin at 9am on Wednesday as the start of the St Stephen’s Day sales. Photograph: Collins 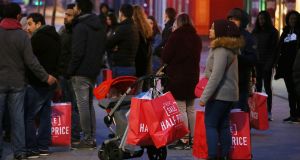 Shoppers queue on Henry Street in Dublin this morning ahead of the shops opening and the beginning of the St Stephen’s Day sales. Photograph: Collins 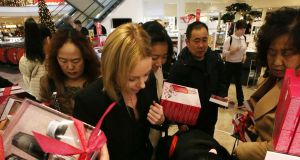 With the positively quaint notion of January sales long since consigned to history, and online sales underway before turkeys hit tables, one might have expected St Stephen’s Day to be something of a damp squib for Dublin’s retailers.

But the city’s two principal shopping streets, Grafton Street and Henry Street, were buzzing by mid-morning, though some were more of the sightseeing variety – eager for an excuse to get out of the house following the long lead up to Christmas Day, which had seen many families enjoying each other’s company since last Friday.

For the city’s large department stores, the now “winter” sales are still an event, with shoppers waiting to get in the doors when most opened at a very civilised 9am.

Most early birds in Brown Thomas made a beeline for the hand bag section, or sections, with the various high-end brand concessions ringing the ground floor of the Grafton Street store.

With discounts of 50 per cent and in some cases 70 per cent, prices had gone from eye-watering to merely gob-smacking, which in designer handbag territory spells a bargain.

A velvet rope queuing system - much en vogue in recent years to add to the atmosphere of exclusivity - was absent from Prada and Gucci and, though still in use in Louis Vuitton, it was corralling just two or three shoppers.

“There appears to be a higher mix of domestic customers and fewer Chinese customers this year, and while there are a lot of hard core accessories shoppers, we’ve noticed more men shopping this year,” he said.

There was a similar pattern in Arnotts on Henry Street where menswear and jewellery were proving strong sellers, according to managing director Donald McDonald.

“After a very strong run up to Christmas, we are seeing an excellent start to the sale today [WEDNESDAY]and trading has exceeded our expectations.”

The migration to online - underlined by Amazon’s reporting of a record-breaking holiday seasonon Wednesday - was, however, manifest in the traffic. The city’s quays, which are of a sensitive disposition and descend into chaos at the slightest provocation, were clear throughout the day.

The shoppers, also were less certain things were as “boomy” as in previous years. “Everywhere is quieter I think, some shops are still busy, but there’s definitely not as many people on the streets,” said Lauryn Nolan from Ballyfermot.

In Brown Thomas to exchange a belt, she was accompanied by Ryan Thurgood, an ambivalent shopper. “The roads were very quiet coming in, but that suits me, I’m just wasting a bit of time until the football starts.”

More in keeping with the sales spirit, Angela Flattery from Mullingar had slightly lost the run of herself in Arnotts.

Another label misreading almost lead to the purchase of a €2,700 Fendi handbag, though sense, possibly in the shape of her husband Richard, prevailed.

The military campaigning of the seasoned sales combatant was embodied in Trisha O’Brien from Castleknock, who was letting jewellery go, because the price had not moved as much as she had hoped since before Christmas, and was moving on to coats.

“I had a look before the sales, and now I’m giving myself two hours max. I get in, get it done, then I’m gone.”

1 Businesses can show ‘Dunkirk spirit’ by taking new direct ferry to France
2 Exiting Level 5: What will reopen, when will it happen and when will we know?
3 Hotel restaurants, golf and tennis all in line for reopening but Government to warn ‘every contact counts’
4 Covid-19: Government set to reject advice and approve reopening of gastropubs and restaurants
5 Miriam Lord: Helen McEntee holds up well for someone with barely a leg to stand on
Real news has value SUBSCRIBE

Dissident republican jailed for 22 years for prison officer’s murder 13:11
Hotel restaurants, golf and tennis all in line for reopening but Government to warn ‘every contact counts’ 13:18
New charge of capital murder for Det Garda Colm Horkan accused 12:53
Water body backs EPA call for ‘decade of action’ on Irish environment 11:59
Coronavirus search: How is Covid-19 spreading in your locality? 11:52