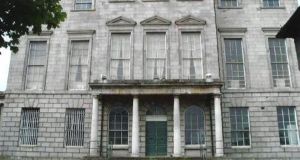 Redevelopment plans for the last Georgian mansion built in Dublin, Aldborough House on Portland Row, have been sharply criticised by the Department of Heritage and conservation organisations.

Built in the the late 1790s by Edward Stratford, second Earl of Aldborough (although not fully completed until 1803, two years after his death), the house was the second-biggest Georgian private residence in Dublin, after Leinster House.

The house in Dublin 1, which has been vacant for much of the last two decades, is in an advanced state of decay largely due to severe water damage.

Its owner, Reliance Investments Ltd, is seeking planning permission to refurbish the building for use as offices and to construct two new five-storey “office wings” and an underground car park.

In a letter to the council the department said it welcomed proposals to conserve and repair the “highly significant protected structure” and bring it back into use. However, it said the height and location of the new office wings would “dominate the historic building and could compromise its architectural integrity”.

The facade of the house would be largely obscured from the Five Lamps junction and along Portland Row, and a “significant reduction” in its potential impact was required, the department said.

The Irish Georgian Society said it had “grave concerns about the scale and intensity of new development and the extent of internal alteration proposed”. It said it was essential that repairs were carried out at the earliest opportunity before any other development is allowed on the site of “this nationally significant building”.

The Dublin Civic Trust said it opposed “in the strongest possible terms” plans to demolish a former theatre building to the east of the site. It also said the new office wings needed to be reduced and recommended the council refuse planning permission on the basis that the application was “materially deficient in the protecting the architectural and historic significant of the mansion”.

Despite being built as an aristocratic townhouse, Aldborough House has spent little time in residential use since its construction. In 1813 it was bought by a former Cistercian monk, Prof Gregor von Feinaigle, who ran it as a school, and by the mid-1840s it had become an army barracks.

Throughout the 20th century it was in State ownership. In the 1940s its gardens were lost when they were taken over by Dublin Corporation for the construction of social housing, leaving it with very limited grounds.

It was used as a depot for the Department of Posts and Telegraphs, and remained in almost continuous use up until 1999 when it was sold by by Telecom Éireann, at the time of its privatisation, to the Irish Music Rights Organisation (Imro).

Although it had been considerably altered through the 20th century, it was in the last 17 years that its decline set in. Imro had intended to use it as its headquarters, but this plan fell through in 2005 and it sold the house on to a company called Aldborough Developments which got planning permission in 2006 to convert it to a private hospital. It never went ahead with the development and the company was subsequently wound up.

Bad Boys for Life review: The funny bits are funny. The serious bits are even funnier
8

Ingenious Ireland: A cornucopia of a book that should be savoured slowly
9