The A to Z of Ireland’s natural heritage

Ahead of Heritage Week, take a lesson in our animals, plants, fungus and much more... 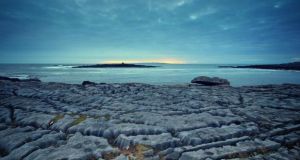 The Burren, where cattle are brought in the winter to graze on the warm, dry stony limestone terraces, a practice known as winterage, which was established in the Neolithic era (which lasted from 4,000BC to 2,500BC in Ireland). Photograph: Getty Images

Today marks the beginning of Heritage Week which runs (counterintuitively) for the next 10 days. This year the focus is on natural heritage, and incorporates a dizzying schedule of activities in practically every parish in Ireland. In preparation I’m going to speed us through an alternative A to Z of the most intriguing, surprising and baffling aspects of Ireland’s natural heritage. So, here goes:

A is for Adoption

And how gulls, herons and even seals will adopt motherless chicks or pups and rear them, despite the fact that there can be no obvious evolutionary benefit. It entails expending vast amount of energy, with zero likelihood of their genes being carried forward. Why?

B is for Bats

And the full-on arms race between them and certain moths who have evolved ingenious defence mechanisms to avoid their ultrasounds signals and natural sonar. Over millennia moths have managed to hack into the click codes of bats, so that they can tell when they are about to be attacked. But bats, in response, gradually change their codes.

The earliest land plant in the world from 425 million years ago, found in petrified form on the Devil’s Bit Mountain in Tipperary by the geologist and botanist John Fehan when he was still a student. These were the first plants to rely on the wind as a tool of propagation: sending out male microspores on the breeze to pollinate others, which gave rise to the reproductive system of almost all plans and trees now.

D is for Disappearing lakes or turloughs: mysterious water reserves which can appear almost overnight, rising 10m in sudden rain and high tides. Despite being miles away from the sea, they can still rise and fall with the tide, pulled by underground currents. Such unpredictable elements were despised and feared for the sudden wrath they could exert, drowning animals or sucking them down through their swallow holes.

E is for Eyebrows and the stealthy little parasitic mites (Demodex folliculorum) that right now are feeding in the hairs above your eyes.

F is for Fungi who along with a host of other bacteria, protozoa and nematodes feed and nourish the roots of all our plants and trees. Without them we would not be alive. Their complex dances, mating rituals, wars and territorial campaigns are what transforms the dead mix of sand, humus and clay into a living vibrant soil.

G is for Grey Wolf

The species died out in Ireland in 1765, but might have thrived had it survived until the Famine.

H is for Heather

The honey of which is high in antioxidants and has phenomenal antiseptic properties. Why don’t we bring more hives to our peatlands to allow bees feed on Ling Heather in autumn, as is done in Lüneburg in northern Germany?

I is for Ice Age and how some parts of Ireland, such as Malin Head, are still slowly rising 2 to 3mm per year back to the level they were at before the ice sheet pushed the entire landmass down by several metres.

J is for Jays and their phenomenal ability to store up to 5,000 acorns in the ground for winter. Somehow, they remember where most of them are cached, using visual clues, but those they forget often germinate and help oak woods spread.

as in the male drone bee who ascends to royalty for a few seconds of its life when it mates with a queen bee on her maiden flight, before having his sexual organs ripped out of him as he falls to his death.

L is for Lobsters

And their phenomenally complex social lives, as fraught and hierarchical as Downton Abbey – not to mention their tendency to pee in each other’s faces.

M is for May Day and the proven benefits of stripping off and rolling naked in the morning dew on 1st May – even Oliver Cromwell and Biddy Early the Witch swore by it.

N is for Neolithic farming and the mind-warping idea that some of its most ancient practices still continue today, such as winterage, in which cattle are brought up into the Burren’s highlands in winter to graze on the warm, dry stony limestone terraces. (The cattle are then driven to low-lying fields in summer when they need access to water.)

O is for Ocean birds and the oil they secrete and spread over their feathers to keep them waterproof. Young seabirds who haven’t yet developed the oil-producing uropygial gland manage to oil their down by climbing through the feathers of their parents who are more strongly lubricated at this time.

P is for Pigeons

And how we need to love these Middle Eastern birds more. As it was humans who domesticated them and brought them into cities for food and carrying messages. We’ve now cruelly abandoned them to sit homeless on park benches and ledges.

Q is for Quails which once arrived each summer from Africa as commonly as swallows, and now are only found in a few fields in Kildare – if even there. In 1589 a dozen quail for dinner cost truppence in Dublin.

R is for Red Squirrels

And the human strain of leprosy bacterium, M. lepromatosis, that is commonplace among them, but doesn’t harm them. Red Squirrels in England carry another strain of leprosy, M. leprae, which shared a common ancestor with our leprosy 27,000 years ago. We’re safe from leprosy thanks to the work of Vincent C. Barry and his team at Trinity College Dublin in the 1950s first identified a compound (clofazimine) that could cure it.

S is for Scientists – citizen scientists to be precise – a new band of observers and amateur researchers who are transforming our knowledge of the natural world through voluntary recording and observation. Their contribution forms a key element of the recent Atlas of Mammals in Ireland (National Biodiversity Data Centre, 2017). The maps were created using 100,000 individual recordings sent in by 2,400 different people.

T is for Trout whose scales have growth rings and can be read just like a tree’s. 95 per cent of them die in their first year, but some of the rest live for two decades. Brown trout will never interbreed with rainbow trout in the wild, but do occasionally breed with salmon. In New Zealand they are thought to feed on the periodic plagues of mice.

U is for Underground, and the bewildering results that Dr. Marion Dowd at Sligo’s Institute of Technology is getting from DNA extracted from bones in deep caves in the Burren, which allows her to trace direct Bronze Age ancestors of children attending the local school.

V is for Val, the world’s earliest known amphibian who was innocently and unjustly fingerprinted on Valentia Island 385 million years ago. An outrage in terms of privacy violation, but an amazingly fortuitous boon for palaeontologists, volcanologists and lovers of weird stuff.

W is for Winkles, both the successful periwinkle, which is still sold as a snack on Kilkee Strand and its pioneering, but foolhardy descendent, the land winkle, which abandoned life in the ocean and its ability to breath underwater eon ago, as it sought brighter fortunes on land. It managed to spread right across Ireland, but alas, terra firma didn’t suit it and it is now confined to a meagre few fields in the Burren.

X is for the X-rated sex lives of orchids

Such is the coquettish ability of Ireland’s bee orchid, not only to mimic the shape of a female bee, but also to release a fake female sex pheromone that it will drive any male bee to distraction. When a male bee tries to mate it he is inadvertently pollinating the orchid. Our mothers warned us about such femme fatales who will resort to anything to have their way. Even their names hint at their sexual duplicity: lady’s tresses, lady’s slipper, not to mention the resemblance to their tubers to human testes (the surgical procedure to remove testes is called orchidectomy). Be warned there are more than two dozen different forms of orchid in Co Clare, most both wonton and slatternly.

Y is for Yarrow

A beautiful feathery, fernlike native Irish herb that is beloved by bees and butterflies, and and will intensify the flavour of herbs grown near it, while also protecting against hexes and curses. Starlings use it to line their nests as a way of inhibiting parasites and it will protect your plants from ants and aphid. It is anti-spasmodic, anti-inflammatory, high in vitamins and delicious in a salad. It used by the Chinese as a divination tool when consulting the I-Ching and in Ireland to flavour beer before hops.

Z is for Zombies, in particular the pair of 8th century skeletons found in Lough Key, Co Roscommon with stones in their mouths. The archaeologists Prof Thomas Finan and Chris Reid suggest the stones were inserted between their teeth to prevent them from coming back to life again as fleshy, undead revenants.

Manchán Magan presents a more conventional A to Z of Natural Heritage, on RTÉ Radio One, from August 21st to 25th, nightly at 10pm.

To work on TV, Normal People had to differ from the book
6