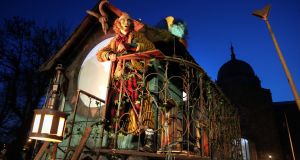 ‘Out of the Wild Sky’ passes by Galway Cathedral on Sunday evening. Photograph: Joe O’Shaughnessy

Lightning struck and demonic drums banished blues across Galway city on Sunday night as a winged prophet was pursued by an illuminated mannequin named Lumo.

“And we all need lots of love at the moment,” Macnas artistic director Noeline Kavanagh had said beforehand, acknowledging her global theme had some national resonance.

Word had it that President Michael D Higgins and his wife, Sabina, might make it over to join an estimated 50,000 spectators, many of whom dressed up for the occasion on the dry, cold night that was in it.

It was not to be, but had a Government jet landed in the centre of Shop Street, it could not have competed with the spectacle. The celebration of Samhain – named Out of the Wild Sky – set out on an extended new route from NUI Galway to the Claddagh basin.

The design was by Orla Clogher and Dave Young, with costumes by Saileóg O’Halloran and sound by Alma Kelleher. The Macnas artistic ensemble was joined by members of Galway Community Circus to make up a cast of 300.

Guest of honour was Labour mayor Niall McNelis, and he was accompanied by several city councillors. One or two recalled president-elect Michael D Higgins’s victorious trip back west seven years ago in what was described as “Galway’s Obama moment”.

Macnas’s madness will have a reprise in Dublin on Monday as part of the Bram Stoker Festival, leaving Moore Street at 7pm for Henry Steet, Mary Street, Capel Street and finishing by the Fruit Market on Mary’s Lane by 9pm.