Brixton remembers one of Ireland's most famous hunger strikers

A plaque at Brixton Prison honours Terence MacSwiney, the lord mayor of Cork who died on hunger strike on October 25th, 1920 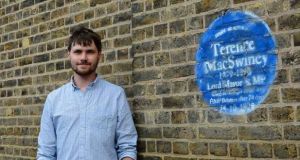 Fergus O’Farrell and the makeshift blue plaque, a spray-painted imitation of the ones erected by English Heritage to commemorate famous people, adorns the west wall of Brixton Prison. Photograph: ©Alan Slingsby/Brixton Media

Terence MacSwiney, the Lord Mayor of Cork and a Member of Parliament, died on October 25th, 1920 after a 74-day hunger strike. He was serving a two-year sentence for sedition in Brixton Prison, south London.

MacSwiney came of age at a time of tension in Ireland when separatists were looking for independence from Britain. Having been denied the freedom which they had voted for in successive elections from the 1870s until the 1910s, extremists took matters into their own hands and staged an armed rebellion against British rule in Dublin in 1916. While MacSwiney did not take an active role in the uprising, he was, nonetheless, closely aligned with the rebels. He was a devout – even puritanical – Catholic, a published playwright, an Irish language scholar and a teacher. He was elected Sinn Féin MP for Mid Cork in the general election of December 1918, but refused to take his seat in Westminster, as he did not recognise Britain’s territorial claim over Ireland.

The Irish War of Independence broke out the following month, and MacSwiney’s home city of Cork was a particularly active and bloody area for its duration. In March 1920, the Lord Mayor of Cork, Tomás Mac Curtain, was shot dead by police as he slept in his bed. In a city so riled by warfare, a man of MacSwiney’s standing and character was a natural replacement.

However, he did not remain in office very long. In August he was arrested and tried by a military tribunal under the Defence of the Realm Act, where he was sentenced to two years’ imprisonment to be served in Brixton. MacSwiney immediately began a hunger strike. His case attracted worldwide media attention. Within days, thousands of his supporters flocked to Brixton and rallied outside the prison on Brixton Hill. On August 25th, a riot broke out between the crowd and the police. The case divided British politics, with some MPs urging that MacSwiney be released. Even the king favoured clemency, although he decided not to interfere publicly.

According to the Observer, “The majority of public opinion and of the press in Great Britain is unquestionably for the Lord Mayor’s release. The instinct of this public opinion is unquestionably sound. A government not guided by it in such a matter must be dangerously out of touch with it. What moves the country is the doubt hanging over the case – just the fear of cruel disproportion between death and the offence.”

The government held out, and so did MacSwiney. Messages of support poured in from all over the world. Another radical who would later become associated with Brixton, Marcus Garvey, sent a message of solidarity and conveyed “the sympathy of 400,000,000 Negroes”. Ten thousand people demonstrated in Glasgow. The mayor of New York telegrammed the prime minister, Lloyd George, to urge him to end the “the imprisonment of Lord Mayor MacSwiney whose heroic fortitude in representing even unto death the opinions of the citizens who elected him has won the admiration of all the peoples who believe in rule of the people by the people”.

After 74 days without food, MacSwiney died on October 25th. His martyrdom inspired many future revolutionaries. According to MacSwiney’s biographer, Dave Hannigan, a young Vietnamese man named Nguyen Tat Thanhn was working in the kitchen of a central London hotel at the time. Upon hearing the news of MacSwiney’s death, he burst into tears, saying “a country with a citizen like this will never surrender”. He returned to Vietnam, changed his name to Ho Chi Minh, and led the Vietnamese resistance movement for three decades, fighting Japanese and French imperialists and later the United States.

MacSwiney’s body was taken to St George’s Cathedral, Southwark. Thousands came to pay their respects, including the mayor of Stepney, Clement Attlee, who would later become prime minister. After the funeral Mass, the coffin was carried to Euston Station in a procession which stretched more than a mile. It was led by mounted police, followed by members of the Irish Volunteer movement and hundreds of priests. Many police officers wore black gloves as a sign of respect and they saluted the coffin as it passed. The body was put on a train bound for Holyhead, where it was transported by boat to Ireland.

Messages of support poured in from all over the world. Garvey wrote: “Hundreds and thousands of Irishmen have died as martyrs to the cause of Irish freedom… They compelled the attention of the world and I believe the death of McSweeney (sic) did more for the freedom of Ireland today than probably anything they did for 500 years prior to his death.” Gandhi and Nehru later cited MacSwiney’s protest as an inspiration, as did Nelson Mandela.

Brixton Prison is still operational with about 800 prisoners behind its walls. But the days of hunger strikes are far behind Britain’s oldest jail. Ironically, the prison has become known for its food. Since 2014, a charity called The Clink has been operating inside its walls. It trains inmates in culinary arts to equip them for life on the outside. Prisoners prepare and cook fresh, local ingredients which are also served by prisoners to diners looking for something a little different.

After clearing a background security check, paying members of the public can enter the prison for a full culinary experience unlike any other. As a starter, for example, you can have duck liver parfait, apricot and rosemary relish, raspberry vinegar gel, rye bread crostini (£6.50). Or for main course, try tournedos of beef, leek and parmesan gratin, pomme gaufrette, boldelaise jus (£19.50). No alcohol is available as it is banned on site.

MacSwiney is not totally forgotten in these parts. On the west wall of the prison, facing a row of sleepy houses, there is a reminder of the rebel Lord Mayor. A makeshift blue plaque, a spray-painted imitation of the ones erected by English Heritage to commemorate famous people who spent time in London, adorns the wall. As the smells of The Clink kitchens waft over the high, imposing walls, this piece of street art reminds us that things were not always this way in Brixton, when the Lord Mayor of Cork starved himself to death for Ireland.
This year’s Terence MacSwiney memorial Mass is celebrated on Sunday, October 28th at 11.30am at St George’s Cathedral, Southwark