Unthinkable: Stoicism is primarily about throwing off the chains of irrational thought 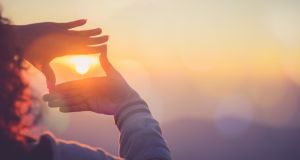 Stoic standard-bearer Marcus Aurelius used to go to a quiet place at daybreak to meditate upon the stars and rising sun. Photograph: Getty Images/iStockphoto

It’s sunrise and I’m sitting on a park bench with my eyes closed. A voice on my headphones tells me to mentally rehearse the attitudes I wish to exhibit in the day ahead.

“If you doze off to sleep that’s fine too,” I’m soothingly assured.

The audio recording is part of Stoic Week, an annual event which this year just happened to coincide with Ireland moving into Level 5 coronavirus lockdown.

Over 20,000 people have signed up to the initiative since it started in 2012, and this year – in the name of philosophical experimentation – I’ve decided to join them. Not just that but I’ve gone full-in.

From my seat overlooking a dew-dappled GAA pitch, I am channelling the spirit of Stoic standard-bearer Marcus Aurelius who used to go to a quiet place at daybreak to meditate upon the stars and rising sun.

Suddenly I have an urge to whip out my phone to take a picture of the scene and – breaking Rule Number One of Stoicism – get annoyed because it’s unable to adequately capture the morning panorama.

Was I a changed man at the end of the week? No, but I did learn a few valuable lessons.

1. Stoicism is about freedom, not punishment

The philosophy of Seneca, Zeno and the gang is often associated with dour, stuff-upper lip asceticism but that’s a gross misrepresentation.

Stoicism is primarily about throwing off the chains of irrational thought, starting with the millstone of self-pity. At its heart is a statement of fact: There are things within your control and things which are not.

Stoicism builds on this foundation with the argument that you can control how you respond to setbacks. All the evidence we have from behavioural psychology shows this to be the case.

2. Political change starts with you

A criticism of the Stoic way of life is that it’s not sufficiently political. Can Stoicism, you might wonder, be the best way of tackling such problems as climate change, inequality and racism?

It’s true Stoicism is not prescriptive on such matters. Rather, it encourages followers to become virtuous or, more precisely, “a virtuoso in living”, says Tim LeBon from organisers Modern Stoicism.

One of the exercises for the week is to fill out a self-monitoring sheet where you reflect on how you handle everyday situations. While this may seem self-indulgent, it has a practical edge.

As my jotter fills up with accounts of workplace and family irritations, it becomes apparent that I have a keen sense of justice – when I’m the one being wronged. When others are being treated unfairly? Not so much.

It is through such self-awareness that you start reaching out to the community to make the world a better place – so the Stoics say.

3. A high IQ does not mean you are educated

Decades of exposure to what Pádraig Pearse called the Murder Machine – a colonial model of competitive schooling that lives on through the Leaving Certificate –- has left us with some screwed up attitudes to education.

To the Greeks and Romans, the hallmark of a learned individual was not cleverness but character. The clearly not-stupid Donald Trump, who is fixated on the concept of IQ, could only have come from a modern education system.

Says Epictetus: “It is an act of a poorly educated person to blame others when things are going badly for him. One who has taken the first step towards being properly educated blames himself, while one who is fully educated blames neither anyone else nor himself.”

4. Stoicism is not a cure-all

The Stoics are constantly reminding us of two things: one, how lucky we are to be alive, and two, to wish the best for others. Probably the most Stoic thing one can do, therefore, is to drop out of the office lottery syndicate (on the grounds that you’ve already hit life’s jackpot) and then to be happy when your colleagues win without you.

But Stoicism can’t guarantee peace of mind. Like most ancient philosophies, it was conceived by men who had little to say directly about such things as domestic work or childcare. Stoic medicine also seems to be cold comfort to someone who has lost their job in the pandemic, for example, or who is grieving the death of a loved one.

However, it does provide a way of looking at things differently – and that fresh perspective brings the promise of healing. One of the most challenging ideas of Stoicism is that health and prosperity are “preferred indifferents” – good to have but not necessary for happiness.

5. There are no shortcuts to being a true Stoic

Yes, there has to be a kicker. Stoicism is all about habit-formation and you’re not going to get that from a crash course.

Moreover to be 100 per cent Stoic you need to accept a couple of dubious propositions, chiefly that “the works of the gods are full of providence” or, in other words, that everything is part of nature’s plan.

But à la carte Stoicism may be good enough for most of us. One of the inspiring things about Stoic Week is hearing the testimony of participants who have learned to manage setbacks in life with Stoic techniques. Some of these methods are now used in modern psychotherapies: picture future catastrophes in your mind to reduce anxiety; visualise a glow of compassion emanating from your body that starts to spread to those around you; begin the day thinking of how to best cultivate your character; etc.

The results were at least encouraging in my case. A survey taken before the week and repeated after showed my life satisfaction rose by 42 per cent and flourishing by 11 per cent as positive feelings, as recorded by the questionnaire, conquered negative ones.

The good news is you don’t have to wait until next October to get started. Materials for Stoic Week can be accessed online all year round at modernstoicism.com

In their own words:

Marcus Aurelius: “Say to yourself first thing in the morning: I shall meet with people who are meddling, ungrateful, violent, treacherous, envious, and unsociable. They are subject to these faults because of their ignorance of what is good and bad.”

Epictetus: “It isn’t the things themselves that disturb people, but the judgments that they form about them.”

Seneca: “The wise person’s mind is like the superlunary heaven: always peaceful.”