Ask yourself before reading: Is this newsworthy?

Unthinkable: Philosopher Ian Olasov believes we should focus on things of ‘practical significance’ 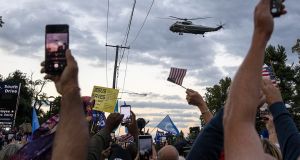 The US president may have lots followers but ‘you get diminishing returns’ on his tweets, philosopher and author Ian Olasov remarks. Photograph: Tasos Katopodis/Getty Images

Feeling overwhelmed by information? Befuddled by constant notifications? How do you know what to read and what to ignore? We may exist on average a few years longer than our ancestors but, in another sense, live less because of an addiction to scrolling on our phones.

One possible coping mechanism is to put limits on screen time. Another is to become more adept at filtering content so pointless stuff is kept at arm’s length. This calls for something beyond a crude technological fix, according to philosopher Ian Olasov. We need to think about what merits of our attention, specifically what’s “newsworthy”.

Not all news is newsworthy, he notes. The crucial distinction is whether something has “practical significance”.

Olasov has been reflecting on this and other questions in a very public manner since April 2016, when he set up an “Ask a Philosopher” booth in a New York park. The university lecturer has collected his findings in a book, addressing various queries received from passers-by. These include “If someone buys me a drink at the bar, do I owe them anything?”, “Is it okay to have a pet fish?” and, inevitably, “What’s the Meaning of Life?”

Olasov is this week’s Unthinkable guest.

What makes something newsworthy, according to your definition?

“Roughly, a story is newsworthy for an audience to the extent that learning it makes it more likely for that audience, or the people in power over that audience, to take significant, reasonable actions.

How has social media changed the way we think about newsworthiness?

“One thing to note is that news workers are governed by a kind of newsworthiness norm. They use the concept of newsworthiness to make judgments about, among other things, the prominence of a story in a publication – where does the story occur in a newspaper or a broadcast, how many column inches or minutes are devoted to it, how heavily is it pushed.

“At the same time, for a number of reasons, there is more and more pressure on news outlets to measure the success of a story in terms of clicks and page views and related measures. So social media threatens the newsworthiness norm in a couple of ways.”

“Usually not, or not newsworthy enough to justify the resources news outlets devote to them. If newsworthiness is practical significance, the question is: what are we going to do when we learn about one of this guy’s tweets?...

“Everyone who is going to be convinced by a report about one of his tweets has already been convinced. You get diminishing returns on these things.”

Speaking of Trump, can philosophy play a role in healing America’s divisions?

“Yes, although I want to tread carefully here... I think healing the US will involve radically changing the terms of public debate, not just finding whatever middle ground we can between the extreme right-wing and the tepid centrism we currently have on offer.

“I imagine some people will get angry with me here if I don’t hasten to add: I want Joe Biden to win the upcoming presidential election.

“That said, I think philosophy can help in a couple of ways.

“First, when it’s working as it’s supposed to, philosophy puts us on our best behaviour. Philosophers – and really all of us, when we’re self-consciously doing philosophy – are often able to reason calmly and productively, sometimes across deep disagreement, on topics that otherwise tend to devolve into trolling, sloganeering, and the pointless exchange of glib one-liners.

“So whatever philosophers can do to export the norms of thought and discourse that make these conversations possible... it’s all for the best.

“Second, there are a lot of substantive political and moral projects that philosophers can contribute to... I’d like to see more opportunities for epistemologists, philosophers of science, and philosophers of education to collaborate with schools and science funding agencies. There’s plenty of work to do.”

It’s very hard to see a philosopher king being elected president of the United States. Assuming it were possible, would it be desirable?

“Depends on the philosopher, I guess. But probably not. Mao and Lenin were both philosophically serious thinkers, but it didn’t prevent them from doing really awful stuff. Maybe their philosophical clarity and strength of conviction had something to do with their capacity for awful stuff.”

What’s the most difficult question you’ve ever been asked?

“One person said that her husband had died a few years ago, and she couldn’t shake the sense that she was somehow responsible. I think I said something about the idea that judgments of responsibility are made up of our ‘reactive attitudes’ like guilt and resentment, and we talked about what happens when our emotions represent things as being one way – say, that we have done something wrong, or that we need to make some kind of expiation – and our considered beliefs conflict with those representations.

“I hope it was helpful, but who knows what to say, really?

“Maybe if I thought about it harder I could make explicit some best practices for handling situations like this, but for now it seems like it’s a matter of being open and creative and light on your feet – ‘finely aware and richly responsible’, as Martha Nussbaum says.”

Ask a Philosopher: Answers to Your Most Important (and Most Unexpected) Questions by Ian Olasov is published by Hachette.

Covid-19 and dementia: ‘My father studies me, as if trying to put together a difficult jigsaw’
8