‘Black hair is so much more than hair’: Emma Dabiri’s passionate exploration of identity 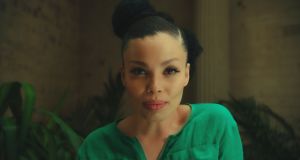 “Our hair tells many stories – of ancestry, of migration, enslavement and freedom, resistance and empowerment,” says Irish-Nigerian writer and academic Emma Dabiri towards the end of her emotive exploration of black identity as told through the prism of African hair  in Hair Power: Me & My Afro (Channel 4, 10.15pm).

Black hair has been variously disdained and fetishised by Eurocentric white culture across generations, we learn. For black people growing up in Europe that has created many internalised complications.

“You realise that you never loved your hair,” says entrepreneur and campaigner Jade Holman-Travis, one of more than a dozen black Britons interviewed. “Which then makes you realise: did you really love yourself?”

As black women we have to think three steps ahead

Dabiri largely grew up in Dublin before moving to London to pursue an academic career and is the author of the 2019 non-fiction book Don’t Touch My Hair. She has a natural gravitas and relatability on screen and frankly this one-off film, part of Channel 4’s Black History Month season, could have done with more of her.

As it is, she largely makes her presence felt off camera as narrator. But that isn’t a deal-breaker, as the testimonies of the interviewees are moving and heartfelt (the documentary is largely UK-centric).

Cultural appropriation, the pressure to conform to Western beauty standards and the communal importance of black hairdressers are among the subjects covered. “As black women we have to think three steps ahead,” says one interviewee. “We have to be mindful of how we are perceived, always making sure we are given even a chance to show what we could bring to the table.”

I [wanted] to be white. You emulate what you see

“If your hair is too thick, too black or too natural that becomes something that can identify you as being black more than your skin tone,” says Pablo, a football coach and mentor. “We don’t see it as beauty. We see it as problematic.”

There is also an exploration of the billion-euro “Relaxer” industry, whereby African hair is smoothed so that it can be shaped to look more European. One man recalls feeling envy at his predominantly white school at how easily other students could copy the 1990s “curtain” hair of David Beckham and Leonardo Di Caprio.

The story of black hair is, of course, the story of colonisation and centuries of cultural erasure. And that deeper truth is communicated with great passion and thoughtfulness. Or as Dabiri puts it succinctly: “Black hair is so much more than hair.”

Malachy McCourt: ‘Frank wouldn’t be happy unless he was miserable’
9 Criminals - born or made?
10