‘You meet certain actors and it’s just... no’ 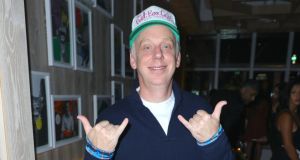 At 47, Mike White, the remarkably talented writer, director, actor and producer of School of Rock, is enjoying the most feted year of his already gleaming career.

As we meet, the White-penned Beatriz at Dinner, a tart skewering of social inequality that pitches Salma Hayek’s Mexican masseuse against John Lithgow’s mega-capitalist, has been cited by the National Board of Review and nominated for two Independent Spirit Awards. Beatriz feels like an instant American classic. And no wonder.

“My second-grade teacher was Sam Shepard’s mother,” says White. “So that was when I started reading plays. Even when I didn’t fully understand them, I loved the way the dialogue was written on a page. Since I was 10, I’ve wanted to write an Edward Albee-style play. Something with people ordering drinks.”

Brad’s Status, White’s latest dramedy about Instagram-envy, will hit cinemas  early this month. Between these admired releases, White was a co-writer on The Emoji Movie. He’s not sorry.

“I don’t want to crap on it,” says White. “I know people who put a lot of time and effort into that movie. I don’t think we realised that the notion of telling kids that there’s cool stuff in your phone and you can live in your phone was going to repel certain cultural commentators. But this is Sony’s Emoji Movie. It’s like working on an iPhone. Writing and directing on a studio film means something different.”

As in the great philosophical query of our age: who directed the Han Solo movie?

“That’s a good and obvious example,” says White. “I have a friend who worked on that. We have romantic ideas about how movies are made. But nobody wrote or directed that film in a meaningful way.”

White’s unlovely adventures with emoticons has allowed him to pay the bills and work on Beatriz and Brad. It’s not such a bad trade off. His father (the Christian LGBT rights activist, Rev Mel White), came out as gay in 1994, and was a ghostwriter for such religious extremists as Jerry Falwell and Pat Robertson. He had it much worse, notes White.

Besides, the sometime producer and writer of Dawson’s Creek and Freaks and Geeks is reluctant to think of work as a “means to an end”.

“This idea of a means to an end is really just living your life,” says White. “I can find fun in different things. On Dawson’s Creek I was just happy to have a job and be on set where I was learning. And I was paying off my school loans while I was doing that. I want to make things that are meaningful but I also can find meaning in things that, from an outsider’s point of view, seem less meaningful.”

He laughs, adding: “Anyway, for some reason when I get a lot of praise, it makes me anxious. But when I get pilloried I think: ‘Oh, I can learn from this’.”

Brad’s Status casts a particularly neurotic Ben Stiller (picture more self-absorbed than Greenberg) in the title role. The head of a non-profit organisation, he feels that the life he’s made for himself is inadequate. Conversely, he seethes with envy when, scrolling furiously through social media, he considers the lives of his former college chums, a coterie including Michael Sheen’s White House adviser, Jermaine Clement’s internet millionaire, and Mike White’s Hollywood director.

“There’s a vicious side of me like Brad,” says White. “And I’ve seen it in a lot of people I know, but I haven’t seen a lot of movies tackle it. It’s that psychic dread of waking up in the middle of the night and feeling some kind of lack. I do think that social media has amplified that kind of competitive thinking and feelings. I’ve noticed this myself. I’ve caught myself thinking: ‘Oh look, they’re on vacation again.’ The other side of that is the carefully curated lives we share publicly. There’s a fine line between sharing enthusiasms and creating envy in your peers. With this one, I really wanted to play the absurdity of what you know is going on in his mind.”

To be honest, the longer I am in this business, the more I dread meeting actors

Long before anyone thought to coin the term sadcom, White was writing and directing films that blurred the line between comedy and drama. As a screenwriter, he scored box office success with the genuinely side-splitting Jack Black comedies School of Rock and Nacho Libre. But, drawing from real life, his own directorial brand scooped awards and critical success with lemony flavours.

“Somebody introduced me at a party: ‘Mike writes comedies that aren’t funny’,” laughs White. “I don’t go in with the intention of creating a specific mood. But as much as I enjoy comedies, some of them can feel lighter than air. And then drama that has no kind of comedy or absurdity just doesn’t feel true to life. So I usually end up somewhere in between.”

He enjoys exploring “pieces of himself”. In Year of the Dog, a pet-owner (played by Molly Shannon) moves toward veganism and animal activism, mirroring White’s own beliefs. In Enlightened, the HBO series he co-created with Laura Dern, a 40-year-old executive attempts to rebuild her life following an “episode”, just as White, too, suffered a nervous breakdown some 13 years ago. He had, as he notes, become “such a workaholic”, that he required a steady programme of veganism, meditation and yoga to get him back on track.

“I find when I meet with actors that just do dramatic work that I don’t really connect with them as people,” he says. “They’re just not in my tribe, I guess. I think people who are comedians are generally more fearless and less self-conscious.

“They don’t need to be cool or to look good all the time. I like working with friends. Molly Shannon is a friend. Jack Black is a friend. I’ve known Ben Stiller forever. To be honest, the longer I am in this business, the more I dread meeting actors. You meet certain actors you admire and then you take a meeting and it’s just... no.”

Chuck & Buck (2000): A man-child playwright (Mike White) attempts to reconcile with the friend (Chris Weitz) he once sexually experimented with.

The Good Girl (2002): A small-town 30-year-old (Jennifer Aniston) embarks on a doomed affair with a co-worker.

School of Rock (2003): A struggling rock star (Jack Black) poses as a substitute teacher at a prestigious prep school.

Nacho Libre (2006): A monk (Jack Black) moonlights as a Mexican wrestler to help the orphanage where he works.

Beatriz at Dinner (2017): The polarities of American society are probed in this awkward social encounter between a Mexican immigrant (Salma Hayek) and a boorish capitalist (John Lithgow).

Flash Gordon at 40: The greatest superhero film ever made?
9