How to have a #MeToo conversation

We need to direct the #MeToo rage of 2017, let it cool into a foundation for structural change

On October 15th 2017, actor Alyssa Milano asked people on Twitter to tweet "Me Too" to help highlight the issue of sexual harassment, the movement has seen allegations be made against some Hollywood elite, including Harvey Weinstein. 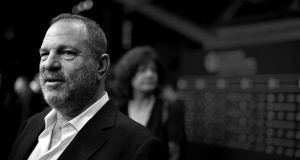 Harvey Weinstein has been the subject of many allegations of sexual assaul. Photograph: Alexander Koerner/Getty Images

The year 2017 taught many men for the first time that there is a systemic social problem whereby women are harassed and assaulted in professional spaces, then undermined or even blamed for it. I am greatly heartened by the numbers of my male friends who have promised to keep their eyes open that little bit wider, to step in and stand up for us.

It is hard work, this #MeToo moment, necessitating many difficult conversations. Sometimes it feels like my interlocutor wants to find virtually any explanation for hundreds of thousands of women coming forward to share stories of harassment other than the simple fact of sexist abuse.

Yet, if we don’t have these conversations, I’m afraid that discourse will polarise, that this extraordinary feminist moment will be swallowed by misogynistic backlash. We need to direct the flow of molten #MeToo rage and let it cool into a foundation that can support structural change. The interactions required to do so are emotional, exhausting, yet vital.

One of the hardest things for me is to contain the anger I feel. A smart-arse response feels good in the moment – but it probably belongs in a Feminist Rage WhatsApp group, rather than in dialogue with a potential (if reluctant) ally.

There are many predictable excuses for the sexist status quo. They come from different places: from men like Harvey Weinstein, who has been the subject of so many allegations of sexual assault, and men like George Hook or Matt Damon, who are part of the problem because of what they say.

I try to remember that some such statements can be genuine points of questioning and confusion. As these excuses resurface time and again, I attempt to temper my reactions in productive ways. Sometimes it works, sometimes it doesn’t, but here are some answers – good, bad, and ugly – to all your #MeToo conversation faves.

“I came of age in the ’60s and ’70s, when all the rules about behaviour and workplaces were different. That was the culture then.”

Uh-huh, that’s right, back in the 1970s, before women were people, raping them was just fine because they didn’t have any emotions.

What I try to say instead

Social mores are certainly changing over time. Behaviours that were socially acceptable 50 years ago are unacceptable now. As women have gained power in society, they’ve been able to express how uncomfortable and victimised sexual harassment has made them feel.

I understand this might be confusing for some men, who are used to commenting on women’s bodies or touching female colleagues in ways that they would not interact with male colleagues.

But the emotional impact of this confusion is nothing compared to the trauma and distress that women have been experiencing for decades at the hands of men who frighten and belittle us, or some, like Weinstein, who use a veneer of old-timey good-natured horseplay to assault and rape us.

“As a husband, father and grandfather, I am shocked and saddened by this case.”

Literally every human male has at least one female relative. If not being related to a woman is the standard for misogyny, then it would not exist, which is clearly not the case. As a husband, father and grandfather, you’re still a bloody sexist.

It’s great that you love the women in your life and want the best for them. But women who are not related to you are just as worthy of respect, not because they are a man’s daughter, mother or wife, but because they are people. Many men who harass women have genuine, loving relationships with other women in their lives.

It’s extremely unhelpful as we try to tackle sexual misconduct to have emotional proximity to women proffered as personal absolution.

“And, honestly, who’s got the foggiest clue about where ‘inappropriate’ even begins these days? . . . In this toxic, paranoid environment, women will never be trusted as advisers. They will be frozen out of networks”

(The former editor of Loaded magazine, Martin Daubney, writing for The Telegraph)

Yes, so confusing! Who can tell if a female colleague wants to see your penis? Does she want a shoulder rub? DOES SHE? What if she accuses you of harassment for NOT giving her a shoulder rub? What if she’s offended that no one has shouted “nice badoinkies” at her today?

Oh, I’m sorry, are you feeling distressed because you have to spend a modicum of mental energy wondering if your behaviour at work might be read sexually? Welcome to the orchard, buster, us gals been here for years. How d’ya like them apples?

It’s discriminatory to exclude people from professional situations because they belong to a demographic that experiences harassment. If the problem is that men harass women at work and your answer is to exclude women from opportunities, that’s pretty lousy.

However, I can relate to the complexity of negotiating personal boundaries in professional situations. I’m a university lecturer. I feel comfortable hugging some colleagues and students, others not so much. I feel comfortable meeting with some folks with my office door closed, others not so much. But I certainly don’t start my professional and personal relationships at work by assuming a right to physical contact and private interactions.

If you immediately demand these kinds of intimacy from female colleagues, maybe have a think about why. And if you’re genuinely worried that a behaviour was inappropriate, apologise, and don’t do it again.

These kinds of checks might seem like additional emotional labour, or something that depersonalises the workplace. But if a little free and easy familiarity is lost around the office, what is gained is an ability to forge genuine partnerships over time in ways that leave women feeling safe, respected and valued as equals.

You don’t get cookies for not raping people, bro!

Be nice, be nice

We know that not all men are harassers, abusers and rapists. Yet enough of them are to make it a problem for all women. If your reaction to women saying #MetToo is to profess your personal innocence and the innocence of your mates, then you are not listening, and you are not helping.

Listen to us. Help us.

Emer O’Toole is assistant professor of Irish performance studies at Concordia University in Canada, and author of ‘Girls Will Be Girls’

Óró…: This immersive production is a feast for the senses
7

Fleet Foxes: ‘I’m trying to find silver linings in this madness, a healing space in music’
8