The Climb review: a big-hearted crowd-pleaser in the name of love 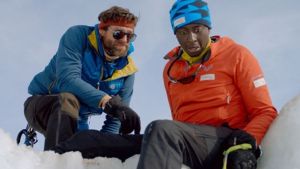 In 2008, Nadir Dendoune reached the summit of Everest, and held up a handwritten sign - ‘93’ in tribute to the Parisian banlieue where he grew up. He was the first French-Algerian to climb Everest, a feat made all the more remarkable by his lack of mountaineering experience. Before the 2008 expedition, he had never set foot on a mountain.

Like most of his friends in the projects, Samy (the hugely likable Ahmed Sylla) is unemployed, yet determined to prove his worth to Nadia (Alice Belaïdi), the girl he loves. “For you,” he promises his doubtful muse, “I would climb Everest!” Thus begins a foolhardy adventure to Nepal, armed with such specialised equipment as a jar of Nutella, a replica Zidane shirt, and a trashy romance novel entitled Impossible Love.

At first, Samy looks doomed. The amateur alpinist runs out of breath on the gentle slope between the airport and his hostel. He looks surprised when two Sherpas walk past with a corpse wrapped in blankets. And he gets dizzy on the first rope bridge he encounters.

Yet for all these trials, Samy never stops smiling, never gives up, and is quick to make friends, especially with his young guide, a Johnny Halliday super-fan he calls after the late French singer (Umesh Tamang).

Meanwhile, back at home, the entire ‘hood is following Samy’s every step. A local radio station and local newspapers discuss little else. A block party seems certain.

Apart from its sizeable collection of Bollywood films, Netflix has been slow to add foreign language titles to its arsenal. The Climb, however, is one of those big-hearted French crowd-pleasers – think Welcome to the Sticks or The Intouchables – that marks it out as a subtitled movie for those who don’t like subtitled movies.

As an assistant director, Ludovic Bernard has worked on Tell No One, Luc Besson’s Lucy, and the Taken franchise. The Climb marks his directorial debut. As the first narrative feature to go all the way to the summit of Everest, it’s a uniquely spectacular affair.

Viewers from this part of the world may well flinch upon encountering a Londoner in the 2005 Champions League Liverpool shirt who tells Samy: “Tea is for limeys, mate, not for French frogs.” But even the occasionally broad humour doesn’t spoil the punch-the-air denouement.