Photograph: An enchanting romance as plausible as it is magic 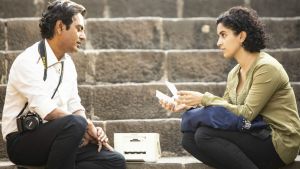 ‘Batra finds a quietude and intimacy against Mumbai’s teeming streets.’

Following on from two successful Anglophone pictures – The Sense of an Ending and Our Souls at Night – director Ritesh Batra returns to India for Photograph, an enchanting low-key romance that replicates the wistful longing of Brief Encounter.

Rafi (Nawazuddin Siddiqu) hails from a far-flung northern village but is eking out a living photographing sightseers at the Gateway of India, in the hope of repaying a family debt. One morning, he captures the image of a soulful-looking young woman. She is Miloni (Sanya Malhotra), a twenty-something accountancy student. They are very different people. She’s privileged, light-skinned, Gujarati-speaking, and Hindu; he’s poor, dark-skinned, Urdu-speaking, and Muslim. They do, however, have one thing in common: families who are keen to see them married off. Thus, in an effort to appease his pushy grandmother Dadi (Farrukh Jaffar), Rafi prints off an image of Miloni and send it in a letter back home, claiming that this is a photograph of his new fiancee.

His plan comes unstuck when Dadi hops the next train to Mumbai with a view to meeting Miloni. There follows a search and a proposal – which interestingly happens off-screen – in which Rafi tracks down Miloni and persuades her to pose as his girlfriend. A tender, unlikely romance ensues.

It’s a set-up that recalls such vintage Hollywood pretend relationship cheese as The Proposal and While You Were Sleeping. But Batra’s film has enough footing in the real world – with its street vendors and crowded lower order rooms – to scan as light social realism. Every conversation – from the exchanges Miloni has with her maid to a random row with a taxi driver – is carefully and intriguingly class conscious. Working with cinematographers Tim Gillis and Ben Kutchins, Batra finds a quietude and intimacy against Mumbai’s teeming streets. The chemistry between the leads makes the film as plausible as it is magic.

The Movie Quiz: Who never got to direct an episode of Columbo?
Real news has value SUBSCRIBE