Oldboy: An established classic emerges in a new print

Review: Famous, often-copied action sequence remains as striking as ever 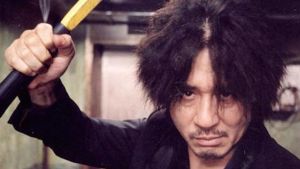 Awarded the Grand Prix, Oldboy went on to gather ecstatic reviews and open new doors for Korean cinema in the west

Park Chan-Wook must have smiled when he heard that Quentin Tarantino was jury president at Cannes in 2004. The Korean director’s bleakly comic Oldboy – a variation on themes of revenge – was comfortably in Quentin’s wheelhouse. The story goes (who really knows?) that Tarantino fought for Oldboy, but, with the Iraq War surging, he could not resist a Palme d’Or push for Michael Moore’s Fahrenheit 9/11.

Park may have won the long campaign. Awarded the Grand Prix, the picture went on to gather ecstatic reviews and open new doors for Korean cinema in the west. Its most famous action sequence – the protagonist fighting his way down a corridor in one take while the camera follows a parallel path – is among the most copied of the decade. In 2003, Oldboy received the ultimate accolade of a terrible US remake (from Spike Lee, no less).

The scenario remains as striking as it was on release. In a construction that Samuel Beckett would have savoured – if not enjoyed, exactly – Choi Min-sik plays a middle-aged man who, imprisoned mysteriously for 15 years, sets out for revenge when he is equally mysteriously released.

Park named his protagonist Oh Dae-su after Oedipus and the film does run him through the sorts of trials the Greeks relished. No human suffers so much as the octopus that Choi really eats alive (boo!), but Oh Dae-su has a rough enough time of it. The picture is, nonetheless, always teetering on the edge of comic absurdity. That famous corridor battle moves with the elegance of a Stanley Donen musical. The violence is, there and elsewhere, heightened to such a level that it becomes hard to take seriously. None of this detracts from a determination to investigate psychological depths that lurk in the brain long after the film has ended.

Oldboy emerges in a new print as an established classic just two months after Bong Joon-ho’s Parasite finally became the first Korean film to win the Palme d’Or. The groundwork was laid here.