Filmmaker’s hits include The Lost Boys, Falling Down, St Elmo’s Fire and Flatliners 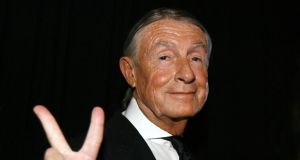 Film director Joel Schumacher has died at the age of 80.

The filmmaker, whose hits included Batman Forever, St Elmo’s Fire and The Lost Boys, died of cancer. A statement from his publicist said that he “passed away quietly” and will be “fondly remembered by his friends and collaborators”.

He also directed Veronica Guerin,  the 2003 biographical film about the Irish journalist who was shot dead in 1996.  He was also at the helm for two films starring Colin Farrell, the drama Tigerland, the thriller Phone Booth.

Schumacher initially worked in the fashion industry before entering film as a costume designer for Woody Allen’s Sleeper and Interiors. His first screenplay was for 1976’s musical drama Sparkle, which starred Irene Cara and was later remade with Whitney Houston. His directorial debut came in 1981 with The Incredible Shrinking Woman, starring Lily Tomlin.

His first hit came in 1985 with Brat Pack drama St Elmo’s Fire, which then led him to make The Lost Boys, which became an even bigger hit in the summer of 1987. As the ’90s began he made supernatural thriller Flatliners and romantic drama Dying Young with Julia Roberts, before scoring his most acclaimed film to date with 1993’s Falling Down, starring Michael Douglas.

The decade also saw him make two John Grisham dramas, The Client and A Time to Kill, and enter franchise film-making with Batman Forever and Batman & Robin. His work also included  the Jim Carrey horror The Number 23. His last film was 2011’s Trespass starring Nicole Kidman. In 2013, he also directed two episode of House of Cards for friend David Fincher.

While his films often made a lot of money (globally more than $1 billion combined), critics weren’t always kind to him. “My success annoyed a lot of people always,” Schumacher told Vulture in 2019. “Maybe they thought I didn’t deserve it.”

Tributes are pouring in from those who knew him or his work, including actor Emmy Rossum, who starred in his 2004 adaptation of The Phantom of the Opera. “I am in tears learning of Joel Schumacher’s passing,” she tweeted. “He was a force. He was one of kind. Creative. Intense. Passionate. He played a huge part in the shaping of my life. I don’t have the right words right now.”

Corey Feldman, who starred in The Lost Boys, tweeted: “JOEL U R A BEAUTIFUL SOUL & U WILL B MISSED!”

Playwright and House of Cards showrunner Beau Willimon tweeted: “I was lucky enough to work with Joel Schumacher. Smart, funny, talented. A true iconoclast. And he could hold court and tell a story like no other. RIP Joel.”

Ben Stiller also tweeted: “He was kind, talented and made movies we went to the theaters for. A true professional, and a magnetic presence.”

In a 2017 retrospective of Batman & Robin, Schumacher spoke about his career in film. “I think I’m one of the luckiest people that ever lived. I got my dream. I got it so much bigger than even I could have dreamed it,” he said. “You know, I’m just a kid whose parents died very young who was on his own and grew up behind a movie theatre before TV, and I wanted to tell those stories, and look what happened.” – Guardian