Which Skywalker? And nine other questions Star Wars: The Rise of Skywalker must answer

Like: Who are Rey’s parents? Who are Finn’s? Is it okay to include a digitised Carrie Fisher?

The final trailer for Star Wars: The Rise of Skywalker 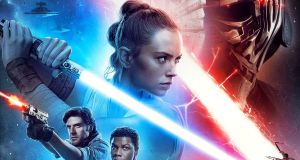 Could Rey be the child of ordinary fellows like you or me?

JJ Abrams, director of The Force Awakens, returns after Rian Johnson’s The Last Jedi divided fans with its fierce narrative risks. JJ has a few loose ends to tie up. What questions does Star Wars: The Rise of Skywalker – opening in cinemas this week – need to address?

1. Where is Star Wars Island?

We don’t mean: where is it in the Star Wars universe? That information is (I guess) available in some online encyclopaedia. It’s in the Sea of Toffo on the planet Wispa or something. We don’t mean where the scenes were shot. Star Wars Island (formerly Skellig Michael) is just off the coast of Kerry. We’re worried, on the evidence of the trailer, that Ireland’s greatest contemporary tourist magnet has been eliminated from the narrative. Boo!

This is obviously the big one. Many people who really, really care about this stuff were disturbed by the implication in The Last Jedi that plucky Rey (Daisy Ridley) was the child of ordinary fellows like you or me (if we were from long ago and far away). This seemed like a satisfactorily diplomatic anti-twist. There is no reason the bravest person on the planet can’t be of humble stock, but that doesn’t tally with the popular conception of a fairy story. This was, according to maniacs on Reddit, one of the ways that “WOKE” RIAN JOHNSON RUINED STAR WARS.

John Boyega’s performance as Finn has been one of the series’ highlights. He does as good a job of being comically frightened as Bob Hope once did, but that wariness can’t conceal an inner strength. There is every possibility that the roots of his conflict may be buried in a troubled — and as yet unexplored — childhood. It is our profound hope that JJ Abrams’s film will reveal the Finn clan to be non-binary social workers striving for gender equality in intergalactic polytechnics. Did we mention that “WOKE” RIAN JOHNSON RUINED STAR WARS?

4. How much more will we see of Princess Leia?

This is a very 21st-century question. Had the much-missed Carrie Fisher died after the shooting of The Empire Strikes Back nobody would have wasted time wondering whether she’d make it into Return of the Jedi. We know that the new film will be recycling footage of Fisher from earlier films, but, with the technology available to us now, they could well keep her alive for a future trilogy. Would that be in good taste?

5. So who the heck was Snoke anyway?

It looked as if this grey character was going to a key villain for the current trilogy when he was introduced in The Force Awakens. Then Adam Driver sliced him in half towards the close of The Last Jedi. Or was it Daisy Ridley? Anyway, the supposed successor to Darth Vader ended up in an inconvenient state of bifurcation earlier than we had anticipated. We hardly knew ye?

6. Will Rey turn to the Dark Side?

You know what? We’re going to give this one a big “no”. The internet dropped its collective mega-coke at the sight of Rey wearing a hoodie and brandishing a double-bladed, red light sabre in one of the recent trailers. If you’re wondering why this is of interest then seek out one of the lengthy explanations in YouTube videos. It seems Darth Maul — the bloke with the red head — brandished one in The Phantom Menace. Yeah, well Richard Burton dressed as a Nazi in Where Eagles Dare. So what?

7. The Rise of what Skywalker?

This has really got the gossip mill turning. Luke Skywalker is dead (killed off meekly when “WOKE” RIAN JOHNSON RUINED STAR WARS). So the only remaining members of the clan are Kylo Ren (Adam Driver) and Princess Leia (old footage of Carrie Fisher). Ren sounds more likely. But maybe there’s a Skywalker out there we don’t know about. Could Rey be a member of the family. Possibly, but, because it would annoy the right people, we’re praying it’s the charming Rose (Kelly Marie Tran), victim of an online hate campaign by morons.

8. Will there be a tie-in with the TV series?

Having not yet got access to the Disney+ channel in this territory, we are not in a position to comment on that recently unveiled Mandalorian thing. It’s a bit samurai and a bit western, apparently. Memes tell us that a young creature of Yoda’s species makes an appearance. Disney dearly wish to tie all the incarnations into the same complex bow. So it is entirely possible that some reference may be made. Should that happen, we’re almost certain to miss it.

9. How the heck is Emperor Palpatine still alive?

One of the trailers for The Rise of Skywalker ended with Luke saying, “No one’s ever really gone”, followed by a cackle from the late emperor. Ian McDiarmid had a good time with the character — appearing in all episodes of the first two trilogies — but, having come over all dead in Return of the Jedi, he must have feared that part of his pension was a goner. It seems not. Of course, he could just be a “voice from beyond the grave”. We’ll see.

10. Will we end in resolution?

After Solo underperformed, the good people at Disney, which owns Star Wars, concluded that they were perhaps throwing too many films from the franchise at cinemas. David Benioff and DB Weiss, formerly of Game of Thrones, will be delivering the next film in far off 2022. It seems likely that, rather than risking a cliff-hanger, the team will end the current trilogy with a victory and a wedding. We’re hoping that Rey marries Rose. Because “WOKE” RIAN JOHNSON RUINED STAR WARS. Anything to annoy those nutters.