BBC film about IRA funeral murders to air in March 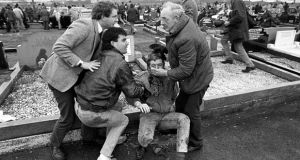 An injured man is aided by mourners, including Martin McGuinness, left, at Milltown cemetary in 1978. Photograph: David Jones/PA Archive/PA Images

Unheard testimony from the families of victims of the bombing of an IRA funeral by loyalist paramilitary member Michael Stone and of a revenge attack at a subsequent funeral that killed two British corporals is to be revealed in a BBC documentary to mark the 30th anniversary of the tragic events.

The Funeral Murders features accounts from family members of the three men killed by Stone at the first funeral – Kevin Brady, Thomas McErlean and John Murray – who the BBC said have not spoken to the media until now about the day their relatives were murdered.

The film has been made by acclaimed film-maker Vanessa Engle, who has previously won critical praise for her candid questioning in revelatory television documentaries such as Inside Harley Street.

In The Funeral Murders, Engle has also spoken to the funeral director who conducted both funerals in March 1988 as well as ex-army and ex-Royal Ulster Constabulary figures – none of whom have spoken about the events before.

Viewers around the world were shocked by the Milltown cemetery deaths, which happened at the funeral of three IRA members shot dead by the SAS in Gibraltar.

Television news cameras captured the scenes of terror at the graveyard in Belfast as Stone fired shots and threw grenades at mourners, failing to to kill his targets, Gerry Adams and Martin McGuinness, but killing the three men and injuring 60 people, including pensioners and children. He hatched the plot in revenge for the IRA’s Enniskillen Remembrance Day memorial service bombings the previous year.

Three days later, at Brady’s funeral in West Belfast, the death toll mounted after two British army corporals, Derek Wood and David Howes, who were driving down West Belfast towards the funeral cortege, were mistaken for loyalist paramilitaries preparing another attack or SAS members. They were beaten by some members of the crowd and then taken away and shot dead by the IRA.

Engle’s hour-long film includes perspectives from republicans and loyalists, including Adams, as well as the security forces and family members of those who were killed. Those sharing their stories for the first time have felt unable to relive the trauma before or not trusted the media to tell their tale but now want to remember those who died.

The re-examination of one of the most notorious chapters in contemporary Irish history is particularly timely with the Irish border issue once again under the spotlight during Brexit negotiations.

Engle said: “Beyond its value as a document of historical record, the film also has contemporary resonance, thirty years on from the funerals in showing how enduring conflict arises when groups of people have politically polarised views.”

The film will air in March on BBC2.