The true story behind The Irishman

As Martin Scorsese’s The Irishman arrives on Netflix, it’s a good time to explain who the real-life gangsters were 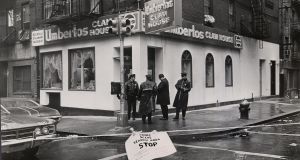 This article contains spoilers for the events depicted in The Irishman

“The first words Jimmy ever spoke to me were, ‘I heard you paint houses’,” said the man now known as “The Irishman” shortly before his death. The man was Frank Sheeran, and besides being an Irishman, he was also a bagman and hit man for the mob. Jimmy was James Riddle Hoffa, the Teamsters union president whose 1975 disappearance has never been solved, and the paint was not paint at all.

“The paint is the blood that supposedly gets on the floor when you shoot somebody,” Sheeran helpfully explained in the book I Heard You Paint Houses (2004), written by a lawyer and former prosecutor, Charles Brandt, based on deathbed interviews with Sheeran and released posthumously.

With the arrival of the Martin Scorsese drama The Irishman on Netflix, it’s a good time to explain who’s who in the crowded story and to try to answer a question Sheeran himself asks in the film: “How the hell did this whole thing start?”

The book’s account of Hoffa’s demise has been challenged by experts on the mob and Hoffa, and by journalists who have written about the case. It has been speculated that Sheeran enlarged his role for the sake of a last payday for his family, although most agree that Sheeran’s telling of the buildup to the climax is credible.

Robert De Niro plays Sheeran, a second World War veteran working as a truck driver in the 1960s with a side job diverting the beef and chicken he was supposed to be delivering and selling it directly to restaurants. When his truck breaks down at a gas station in Pennsylvania, he is approached by a stranger named Russell Bufalino (played by Joe Pesci in the film), who knows his way around an engine enough to get it running again.

The real Bufalino, born in Sicily, kept a low profile in Kingston, Pennsylvania, and although frequently charged with crimes, “has never been convicted of anything but traffic offences”, according to a 1973 article following an arrest. He was once deported, but when his native Italy refused to accept him, he was allowed to stay in the United States.

He was perhaps best known as an organiser of what became known as the Apalachin Conference in 1957, when leaders from several Mafia families gathered in a rural home in upstate New York to hash out disagreements. State troopers, suspicious of the sudden activity in the area, raided the home. The incident was a blow to the mob, putting the Mafia on the radar of law enforcement and FBI Director J Edgar Hoover in particular. But Bufalino rose in the ranks in the years that followed.

Players in the world of Philadelphia organised crime, a less glamourised lot than their New York City counterparts, were known to hang out in the Friendly Lounge, described in later years as something like college for young mobsters. Its owner, known by the nickname Skinny Razor (played by Bobby Cannavale), was like a mentor to the up-and-comers, journalists later wrote.

Another regular face in the neighbourhood was Angelo Bruno (Harvey Keitel), a powerful boss of a Pennsylvania and southern New Jersey crime family. (Keitel’s Bruno, known in life as the “Docile Don” for his low-key demeanour, sees relatively little screen time in a story more interested in the middlemen.)

In his prime as shown in the film, Hoffa (Al Pacino) was a larger-than-life leader of the International Brotherhood of Teamsters, the country’s most powerful union, and one with ties to major Mafia families and bosses. This was not the idealistic, socialist unions of Woody Guthrie songs. In those midcentury years, the Teamsters and other unions carried out bombings, murders, arsons and all manner of violent crime to maintain and grow power. Hoffa, like Bufalino, took Sheeran under his wing, putting him to work.

Sheeran’s relationship with Bufalino and Hoffa introduces several of the film’s memorable supporting characters, and they’re all drawn from real life. There’s Vincent “Crazy Joe” Gallo (Sebastian Maniscalco), a New York City wiseguy known for his high-profile social circles; he befriended Jerry Orbach after the actor played a character based on Gallo in the mob comedy The Gang That Couldn’t Shoot Straight. Gallo was a member of what would become the Colombo crime family.

In 1972, following an interfamily dispute, Gallo was celebrating a birthday with family and friends in Umberto’s Clam House on Mulberry Street in Manhattan’s Little Italy. Gunfire rang out, and Gallo stumbled out to the sidewalk and died. Witnesses described a lone gunman. Police said three or more gunmen performed the brazen assassination, but some officers suggested that was a ruse to weed out false confessions and bad tips, and that there was only one shooter. While other men have been suspected of carrying out the hit, Sheeran, in the book, said he alone killed Gallo.

Sheeran also meets Anthony “Tony Pro” Provenzano (Stephen Graham), “a short, stocky and ham-fisted man who bore the scars of his young years as an amateur boxer,” according to his obituary in The New York Times, which described his “shadowy world of associates whose talents lay in beating other men with hammers, in selling labour peace to the trucking industry, in garrotes and guns and the clever use of garbage grinders and incinerators to make enemies disappear.”

Provenzano and Hoffa, once friends, would turn on one another while serving sentences in the same prison. The story also pulls in Provenzano’s boss, Anthony “Fat Tony” Salerno (Domenick Lombardozzi), who maintained a home base in East Harlem and was decidedly old school. “Unlike younger Mafia leaders like John Gotti,” The New York Times wrote in Salerno’s 1992 obituary, “Mr Salerno typified a more old-fashioned gangster ethic that frowned on flamboyance that might attract attention.”

As for Hoffa, in 1964, he was convicted of attempted bribery and fraud in separate cases and was sentenced to prison, ceding leadership of the Teamsters to Frank Fitzsimmons (Gary Basaraba). When Hoffa was granted an early release in 1971, it was under the condition that he not return to union leadership. Nonetheless, he made it abundantly clear, in his brash, puffed-up way, that he wanted his old job back and set out to secure the votes for the next election.

His relentless drive in this regard, and threats to the status quo within the mob and the union, is believed by many to have done him in. A single event brought many of these players into the same room, an epic set-piece in the movie: Frank Sheeran Appreciation Night, a lavish dinner in honour of the Irishman himself at the Latin Casino outside Philadelphia in 1974. There was a dais of dignitaries, a roomful of Teamsters and mobsters, crooner Jerry Vale, dancing girls, prime rib and, out of consideration for the many Catholics in the room on a Friday night, lobster.

“Jimmy Hoffa was the featured speaker,” Sheeran recalled, “and he presented me with a solid gold watch with diamonds all around it.” But a sideshow that night was the mounting frustration over Hoffa’s refusal to stand down. In the film, it happens at the dinner, but in Sheeran’s telling, a key conversation took place the night before, at a gathering in a nearby restaurant, where Bufalino, Hoffa, Sheeran and Bruno shared a meal. It did not go well. Eventually, as the months passed, orders were handed down to Sheeran, he claimed in the book.

Mob and Teamster leaders were gathering in Detroit in 1975 for the wedding of a daughter of William Bufalino (Ray Romano), Russell’s cousin and Hoffa’s lawyer. The wedding, like other key events portrayed in The Irishman, really happened, a scaffolding of hard facts within which Sheeran’s largely uncorroborated tale plays out. In his telling, he and Russell Bufalino drove to the wedding with their wives over the course of a few days.

Hoffa was already there for a meeting and was waiting – and last seen – at the Machus Red Fox restaurant in Bloomfield Township, Michigan, outside Detroit on July 30th, 1975. Sheeran, long considered a person of interest in the events of that day, would, in his telling, get to him first for a grim final encounter.

“The decision was made to paint the house,” he said in the book, “and that was that.” – New York Times