The rush to cast judgment on Liam Neeson was ‘embarrassing’ 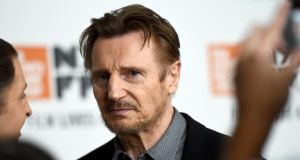 Liam Neeson: ‘Have we been quick to rush to judgment? Totally and embarrassingly,’ says David Puttnam. Photograph: Jared Siskin/Getty

David Puttnam, the Cork-based British film producer, has defended Liam Neeson after the actor’s controversial interview in February in which told a journalist that, following the rape of a friend, he went out with a cosh with a mind to kill a “black b*st*rd”.

Speaking on the latest episode of the Plain Speaking podcast, from University College Cork, Puttnam says Neeson is “a good man” and the rush to judge him is embarrassing.

“He’s a good man, decent man. There’s no bad in Liam. Did he lose his temper? Possibly. Has he lived a very privileged lifestyle for quite a long time? Does that put you into a slight bubble? Maybe, but this is not a bad man.

“The idea that suddenly Liam Neeson has turned out to be someone different from the person we thought he was, or someone less empathetic than the person we thought he was, is stupid. Liam was a boxer. He does know how to handle himself. He comes from a pretty tough background, but is he a decent man? Absolutely. Have we been quick to rush to judgment? Totally and embarrassingly.”

“I can’t pretend that I see the same commitment to community amongst the children and grandchildren of the people I met and were my neighbours for 30 years that was here when I arrived, ” Puttnam told the UCC podcast.

“In a way, we were able to – I’m guilty of it – retreat within ourselves. The need to go out, be convivial, deal with people, and to see that the richness of your life was mirrored in your interactions and interconnectivity with other people, I think that retreated, perhaps the whole business of pub life and people meeting on a very regular basis every Tuesday, every Thursday, to do this, to do that. I think we have been atomised and we have been insulated.”

A poetic response to the pandemic
10

Culture Shock: What next? Blow up Mount Rushmore?
Real news has value SUBSCRIBE