Review: A story about high-frequency trading that could generate billions from shares 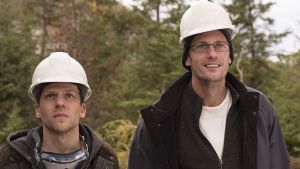 If you see only one Canadian-Belgian drama about high-frequency trading and ultra-low latency direct market access this week, then maybe consider The Hummingbird Project if you’re stuck?

There’s a great deal of capitalist-splaining going on in the new film from Canadian auteur Kim Nguyen (War Witch, Two Lovers and a Bear). An overture of spinning newspapers notes that there have been dozens of stock market crashes since 1929.

Boardroom meetings, led by a silver-haired and delightfully camp Salma Hayek, are debates over the relative merits of neutrino messaging versus microwave towers.

Alexander Skarsgård, sporting a mostly bald head and sloping shoulders, is impressive and almost unrecognisable as Anton Zaleski, the tech-geek code-writing cousin of The Hummingbird Project’s protagonist, Vincent Zaleski (a familiar and weaselly turn by Jesse Eisenberg), has hatched a plan to lay a high-speed cable under the Appalachians and other far-flung spots.

The idea is to gain a millisecond of information advantage – the speed of a hummingbird’s wing beat – for a head start that could bring in billions from shares. (The film is set in 2012 so this madcap scheme is a multimillion dollar gamble that will quickly become obsolete.)

Vincent pitches this elaborate scam as “David versus Goliath” although there’s no reason to believe that it’s anything more than a pricey, pocket-lining con.

Nguyen’s screenplay never breaks down its lofty conceit into digestible Big Short or Moneyball sized chunks. A cancer diagnosis – a literal thing and a big fat metaphor trumpeting the corrosive effects of capitalism – is a narrative curveball that tilts an already precarious project.

An encounter with the Amish further amplifies the “greed is bad” theme.

It doesn’t help that the characters – even when gravely ill or struggling against other adversities – are entirely unlikeable.