Hugh O’Conor: ‘I had to go to Irish college rather than be in Robin Hood: Prince of Thieves’ 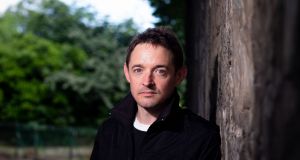 Hugh O’Conor - ‘the cheery Dubliner has emerged as one of our busiest hyphenates.’ Photograph: Tom Honan

Hugh O’Conor is pondering the years after his breakthrough role in My Left Foot.

“I didn’t do some jobs I was offered,” he says. “My parents said I had to stay in school. I remember having to go to Irish college rather than be in Robin Hood: Prince of Thieves. That was grim. But I had a good time at Irish college. My parents were right. I would have ended up like Milhouse.”

Oh, I get this reference. He means the episode of the Simpsons that finds Bart’s best friend getting a role in Radioactive Man and sliding into fame-addled depression.

If Hugh has been troubled by similar existential despair he does a good job of hiding it. Now an absurdly implausible 44 - I bet he still has trouble buying booze in American bars - the cheery Dubliner has emerged as one of our busiest hyphenates. He recently had a role in the RTÉ series Resistance. He was Samuel Coleridge in Mary Shelley.

He wrote a highly admired animated version of Nikolai Gogol’s The Overcoat. He presented a gorgeous exhibition of photographs at this year’s Dublin International Film Festival. After an award-winning premiere at last year’s Galway Film Fleadh, Metal Heart, his first feature as director, now makes its way into cinemas.

How does this work in his head? Is he still an actor who also writes? Is he now a filmmaker who sometimes acts?

“I don’t really know,” he says. “It all comes from the same place. I am always trying to tell a story. Even in photography. At NYU they taught us to study still photography and then shoot on film. Those are similar things.”

Metal Heart tells a story worth telling. Based on a screenplay by novelist Paul Murray, the picture stars Jordanne Jones and Leah McNamara as two sisters who dabble in each other’s contrasting lifestyles during a busy Irish summer. Jones’s character is a snappy Goth. McNamara plays a more organised, career-oriented teenager. The film is generous about the virtues of both life strategies. It’s cool to be cool. It’s nice to be nice.

Hugh had been knocking around a few feature ideas when he bumped into Murray, author of Skippy Dies, and they set to planning an assault on the multiplex.

“He responded to what I had done,” Hugh says. “I said: ‘Maybe you’ll write and I’ll direct. That way we won’t fight so much.’ He is a novelist. He writes longhand. He was writing his third book at the time. So it took a while. He came back with this idea about two sisters. I was kind of a nerdy Goth myself. I wasn’t a very good Goth.”

I can believe that. A consistently positive fellow who will hello you across any room, however crowded, Hugh was probably the best Goth he could be with middle-class parents.

“Yeah, exactly,” he laughs. “There’s a documentary somewhere on my dad and I am in the background with long hair.”

That makes sense. Hugh’s dad, John O’Conor, pianist and former director of the Royal Irish Academy of Music, is among the giants of Irish classical music. You could argue that Hugh grew up in something a little like a show-business family. The elder O’Conor could not easily be confused with Little Richard, but he was on the telly from time to time. Hugh’s story about Robin Hood: Prince of Thieves suggests, nonetheless, that his parents were wary of letting him get sucked into Hollywood’s wind tunnel.

“It was their fault,” he says. “They did encourage me to go to a school for speech and drama. My father had come from a working-class background and his parents had wanted him to do his best. My grandfather was an orphan. So me and my brother ended up in that class. It wasn’t me pushing it. I guess I wanted to be a lawyer or a footballer. You remember the 1980s here? There weren’t Irish movies. There wasn’t really a celebrity culture in the country.”

That’s true. It’s easy to forget how little outside attention was paid to the nation before the cultural changes of the 1990s. It was U2 or nothing. The came Italia ‘90, Riverdance, the boybands and the stag parties in Temple Bar. It requires no great stretch to date the change in tides from the release of My Left Foot in 1989. Hugh is still a little unsure how he secured the role, but he reckons that either Jim Sheridan, the director, or Noel Pearson, the producer, saw him in the film version of Hugh Leonard’s Da. He ended up playing the young version of Christy Brown in the film that helped Daniel Day Lewis to his first Oscar.

“I had to audition in the old Windmill Lane,” he says. “I had met Daniel and on it went. It was very low key. We had a good feeling from the beginning. And Jim was so good with all the kids. He was still young and he had never directed anything on film.”

He confirms the myth that nobody involved reckoned My Left Foot was going to play outside Britain and Ireland. This was, after all, a low-budget film about a little-known Irish writer.

“It was a real surprise,” he says. “[Irish Times film correspondent] Michael Dwyer was supportive. It did fine here. We thought it was done. Then Miramax picked it up as their film for the Oscars and then it all kicked off.”

Hugh has been present as the Irish film industry built on that platform. He studied drama at Trinity College Dublin and later secured a scholarship to study film at New York University. He had a good, early role in The Boy From Mercury. You can see him as Stephen Dedalus in Sean Walsh’s Bloom, a take on Ulysses. More recently he starred in John Butler’s The Stag. Is he old enough to be a veteran?

“I think we are lucky that we have a state body that funds films,” he says of Screen Ireland. “That is an amazing resource and we have a structure in place. Think back. My Left Foot was an English film in many ways. It was financed by Granada! There is nothing to complain about having that resource. But you have to be passionate about what you do. If you can do anything else do it, because it’s not a viable way of living.”

Metal Heart arrives at an interesting time. The film world is currently in a kerfuffle about the perceived underperformance of Olivia Wilde’s Booksmart. Another comedy about two teenagers facing up to adult challenges, the picture received rave reviews, but everyone still went to see the noisier blockbusters instead. It’s not as if it’s a hard film to like. Maybe theatrical exhibition is no longer a welcome space for comedy.

“Maybe the word ‘book’ in the title put people off,” Hugh jokes. “Booksmart is such a great film. I haven’t laughed so much in years. We are getting into cinemas and the reaction to the trailer has been great. I really like Jordanne and I think people react to her. But kids know what they like and they will go and see that of they like. The kids are all on Instagram, Donald.”

These sorts of film used to be massive money-spinners. Hugh is just about old enough to have lived vicariously through the high-school comedies of John Hughes: The Breakfast Club, Ferris Bueller’s Day Off. Sixteen Candles. Those films helped define an era. Did they not?

“The Molly Ringwald character in John Hughes film in particular is important,” he agrees. “She’s not a comic character people. You have sympathy for her and laugh at the people around her. Yeah, but when I mention them to Jordanne she’s never heard of them.”

Where did all that time go?

With no children to worry about, Hugh has the freedom to drift wherever he chooses, but he seems happy to root himself in familiar soil. There is something else that’s changed over the years. Most rising filmmakers would feel professionally obliged to make for LA or London when the heat around them increased. This life is now possible.

“You find the work is very consuming, he says. “Even that exhibition I did was a lot of work. And then I was shooting the pilot. Then I was going to the Santa Barbara Film Festival. If I had a family I would be crap. But you never know.”

Missing out on Robin Hood seems to have done him no harm. And I’m glad he enjoyed Irish college.