For one night only: It’s Cirque du Soleil, the movie 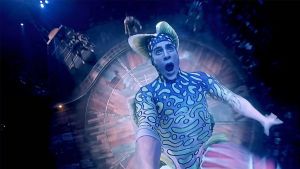 The production values are high: sets, costumes and sound design complement one another eloquently

The good people at Cirque du Soleil may be unhappy to hear this, but their organisation has become something of an institution. First formed in the early 1980s, part of a wave of alternative circus, they put performers into spaces that didn’t also contain captive animals or exploding clown cars.

While rougher competitors were lifting barbells with their genitalia, Cirque du Soleil dealt in a school of middle-stump avant garde that made viewers feel bright without scaring the horses that weren’t in the ring.

Screening for one night only, this competent film shows the current incarnation to diverting advantage. Plough through the surrounding literature and you’ll find explanation of an otherwise obscure plot involving a scientist who travels to another dimension where reality curls puzzlingly about its own bowels. Some fellow represents authority. Some other fellow stands in for the creative urge.

Cirque deserves enormous praise for keeping such skills in the limelight

Never mind all that. The narrative is just there to enable a steampunk universe – Ubu Roi by way of Terry Gilliam – within which the jugglers, contortionists and acrobats can do their things. The production values are high: sets, costumes and sound design complement one another eloquently. The live faux-boulevard jazz sets toes tapping tolerably enough.

All that elaborate packaging sometimes distracts a little from the routines within. There is, however, no questioning the gifts on display. These people are magnificent.

Few traditional circuses could boast such a variety of perfection. Look at this fellow constructing a tower of apparently unstable furniture. Watch the trampoline artists passing across each other’s paths like so many duelling swallows. Cirque deserves enormous praise for keeping such skills in the limelight.

Other live entertainments better suit the cinematic experience: opera, rock concert. The sense of immediate risk that adds spice to the more dangerous performances is absent when presented as a pre-packaged movie. The odd camera is secreted onstage, but few other efforts are made to justify translation to the current medium.

Still, if we must have leotard-heavy celebrations of ancient institutions, better this than the current X-Men movie.

For one night only!