We The Animals: A beautifully made coming-of-age movie

Review: This impressionist film is so airy and otherworldly, it might glide away entirely 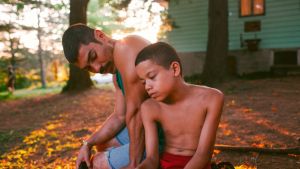 Film Title: We The Animals

For most of this impressionist coming-of-age film about three biracial brothers and their dysfunctional parents, based on the acclaimed novel of the same name by Justin Torres, the siblings might as well be a single wild three-headed organism.

Growing up, largely unsupervised, in forested isolation in upstate New York, the boys are alternately glued to or running away from their parents’ rocky relationship.

The youngest of the triumvirate, Jonah (Evan Rosado), aged nine, is the most individual of the three, an individualism that is rooted in a growing awareness of his sexuality and the stash of drawings and writings that he keeps in the springs of his bed.

This is a beautifully made film with surreal flourishes, and it feels a bit churlish to criticise it’s none-more-indie devices, but the magic-hour photography, dreamy post-Malick voiceover, cavorting semi-feral children, 16mm presentation and scrappy animations based on the protagonist’s scribblings can feel like the Greatest Hits of Sundance distilled into one woozy, hypnotic presentation. Later floating sequences are almost expected in a film that is so airy and otherworldly, one frets it might glide away entirely.

There have been many comparisons made between Jeremiah Zagar’s film and Barry Jenkins’s Oscar-winning Moonlight, but We The Animals could just as easily play in a double bill alongside Beasts of the Southern Wild or Me and Earl and the Dying Girl.

Zagar’s film does distinguish itself as a showcase for its cast. The director, who received an Academy Award nomination for a 2008 documentary, In a Dream, has coaxed marvellous performances from non-professionals who, pre-production lived together as a faux family.

Director of photography Zak Mulligan keeps the camera at the children’s height, a disadvantaged level that mirrors not only their stature, but their drifting grasp of the adult world.