The Pyramid review: half-hearted tropes executed in a half-arsed manner 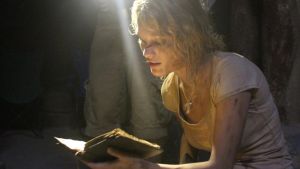 Awards season is once more upon us and so, without further ado, we’d like to present The Pyramid’s crummy CGI Anubis – the Jackal-headed god thingy – with a special gong for Worst Movie Monster. He’s not even the weakest link in the movie. That honour falls to Ashley Hinshaw’s Nora, the sure-fire winner of Worst Final Girl of 2014 (and possibly ever). In an industry often noted for a dearth of decent female roles, Nora has surged ahead in the Useless Heroine stakes. She cries. She simpers. She screams. She calls for daddy. She’s rubbish at climbing a ladder. She freezes when confronted with Worst Movie Monster as, across the room, there are cats.

If only the rest of The Pyramid had the good grace to be as awful as the beastie or the damsel-in-distress. Then we might at least be watching something that had strayed into the realm of so-bad-it’s-funny. Instead, we get half-hearted tropes executed in a half-arsed manner. The film seems to be going for found footage when a band of unlikeable characters – patriarch and archaeologist Holden (O’Hare), his whiny daughter Nora, mouthy documentary cameraman Fitzie (Buckley) and his equally irritating colleague Sunni (Nicola) – venture into a pyramid, only to get chased by Worst Movie Monster. But it soon abandons the whole found-footage idea in favour of a brief Indiana Jones-alike interlude. Oh no! The room is booby trapped to fill with sand! Oh no, again! They survive. Oh, wait! They’ve forgotten that concept. Now there’s some guff about Freemasons. No. Wait. That’s fallen by the wayside too. And what about the toxic gas? Also forgotten. Hmm.

There are two demi-semi jump scares at best. But mostly, the darkened labyrinthine tunnels of the ancient Egyptian structure work to lull the unfortunate viewer inexorably toward the land of nod. Is it over yet?

Director Grégory Levasseur and frequent collaborator Alexandre Aja have been involved in some decent films (Switchblade Romance, P2) and some awful ones (Mirrors, Piranha 3D). This is the bottom of the pile. Yeesh.

Oscars 2021 could be the best awards season ever
7