The Man Who Fell to Earth review: Bowie and Roeg at the height of their powers

In Nicolas Roeg's sci-fi singularity, David Bowie is perfectly cast as a distant alien, unable to properly connect, who sinks into a moneyed, paranoid abyss 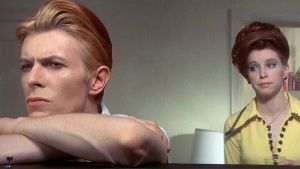 Planets apart: David Bowie and Candy Clark in The Man Who Fell To Earth

Film Title: The Man Who Fell to Earth

Let us celebrate those holy moments when complementary talents are brought together in professional harmony. Something like that happened when, in 1968, Mick Jagger and Nic Roeg worked together on Performance. The melding of sensibilities was even greater when, eight years later, Roeg signed David Bowie up for an adaptation of Walter Tevis’s The Man Who Fell to Earth.

The singer could hardly have made his enthusiasm for the finished project any clearer. Images from the picture adorn two of his best LPs: Low and Station to Station. Shortly before Bowie’s death, Lazurus, an adaptation of the film featuring the star’s music, opened to acclaim on Broadway. Jerome Newton, the titular alien, was every bit as important in defining the public Bowie as were any of his onstage personae.

Contemporaneous interviews - revealing a cocaine-fuelled paranoid uncomfortable with the very air – confirm why Roeg felt Bowie might be right for the role. Though a limited actor, he excelled at playing the cold, detached outsider who sits on the action like a thumbprint on glass.

In the course of the film, Newton, whose planet is dying from lack of water, accumulates vast wealth and, unable to properly connect, sinks into the class of moneyed paranoia that characterised Howard Hughes’s last years.

Roeg and Bowie cannot be faulted in their creation of a supreme, durable anti-personality. And the film deserves ironic celebration for being so very much of its time: lens flare, incoherent decadence, a sense of utter cultural exhaustion.

For all that, it fits slightly awkwardly into the director’s high period. Coming between Don’t Look Now, a certain masterpiece, and Bad Timing, a perverse triumph, The Man Who Fell to Earth feels half-formed and ill-edited. It’s a magnificent creation but, rambling to unforgivable length, it screams out for greater order. Might Roeg consider a shorter director’s cut?

Still, the film’s influence remains undeniable. Would we have had Jonathan Glazer’s more economic Under the Skin without The Man Who Fell to Earth? It seems unlikely.