The Dead Don’t Die: The most light-hearted film of Jim Jarmusch’s career

Review: It’s so much fun that one slightly regrets the eventual arrival of the zombies 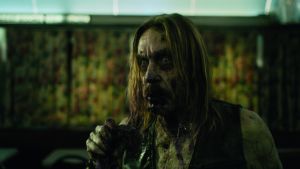 The early trailers for Jim Jarmusch’s latest movie suggested the distributors were a bit nervous about the content. Edited with zany fury, the promo suggested a zombie romp in the style of Shaun of the Dead. Biff, boff, bash! These were not the laconic rhythms that Jarmusch has been exploring for the past three decades. It’s as if Only Lovers Left Alive, his delicious vampire flick from 2013, had been marketed as Count Duckula.

The Dead Don’t Die turns out to be very much a Jarmusch joint. It is – despite apocalyptic themes – the most light-hearted film of his career. Rolling from comic outrage to satirical set piece, the story never finds even the beatnik structure that just about contained Dead Man or Down by Law.

The director has admitted that the starry cast came together as old friends and the movie does play like the result of a merry weekend in the country. But the film-maker’s tone is unmistakable: a listless, deadpan drawl that allows only limited surprise at the most outlandish events.

The characters seem scarcely less deadened before they’re infected than after the brains have begun leaking from their skulls. This self-deprecating gag is probably not intended, but it works well anyway. Take what you can get, Jim.

The picture’s obsession with high Americana is also much in the Jarmusch tradition. The Dead Don’t Die, scored entirely to various versions of a theme song by Sturgill Simpson, is set in an archetypical rural nowhere called Centerville.

For a good 40 minutes these characters loaf around in the approved Jarmusch fashion with no interference from supernatural outsiders. They form a perfect sitcom family: Officer Murray is the sober dad; Officer Driver is the sensitive mom; Officer Sevigny is the (relatively) agitated kid in the back seat. The universe they encounter is very much a creation of the character actors in Jarmuch’s gang.

Nobody but Tilda Swinton could play the Scottish undertaker with a taste for ninja combat. Only Tom Waits could play the maniac in the woods who seems the most primed for catastrophe. One of the best gags finds Selena Gomez and her pals being identified as “hipsters” because they may emanate from the dangerous metropolis that is Cleveland.

All this is so much fun that one slightly regrets the eventual arrival of the zombies. In truth, Jarmusch doesn’t have much to add to the satirical conventions drawn up by George Romero half a century ago. The zombies still retain poignant, one-dimensional manifestations of their host’s living personality. Undead Iggy Pop and his equally ghoulish pal Sarah Driver are, for instance, still coffee-guzzling rock fans in the early-1970s style. The zombies still shamble. They are still vulnerable to headshots.

What Jarmusch does bring is an awareness of contemporary panics and neuroses. He can deny (and he has) that The Dead Don’t Die counts as an “anti-Trump movie” but the prevailing sense that something has gone profoundly wrong in the republic is very much of our time. Not since Nixon has that vaporous political dread been so easy to summon up.

The director will admit that the film is gesturing towards continuing climactic catastrophe. It seems as if “Polar fracking” has triggered the current infestation of walking corpses. Nothing profound is said about those issues, but much dark fun is had laying out the extent of the concerns.

An undemanding diversion for the hipsters of Cleveland and beyond.

‘Look sexy. Look hot. Don’t be so provocative. You’re asking for it’
10 An Irishman at a beheading
Real news has value SUBSCRIBE