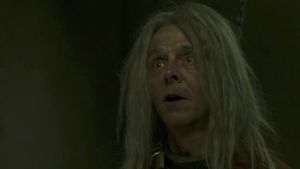 Most of us have been through enough bereavement to know that families do not really gather in ornate rooms to hear the will being read. This happens to only the sort of fictional people who, from time to time, must spend an evening in a haunted house to qualify for an inheritance. We really are at that level of gothic idiocy throughout this fantasia in the key of baloney.

Lily Collins, the least ghastly member of a hyper-rich, hyper-amoral New York clan, is not surprised to hear that her father has left her “only” $1 million from his mighty fortune. She is more taken aback to receive a key and instructions to poke around a trapdoor at the bottom of the garden.

The portal leads to a grimy room within which a mournful figure slumps on a dusty table. It is Simon Pegg and, over the last 30 years of confinement, he has turned into the emaciated, biblically bearded lunatic who used to announce “something completely different” on Monty Python’s Flying Circus.

We’re only about 10 minutes into an unnecessarily lengthy yarn (these sorts of misfires are usually cut down to a merciful 90 minutes) but the plot has already tested the allowances we make for pulp hokum. Does Ms Collins, an upright district attorney, unlock his chains and call the police? She does not. She goes away for a spell and then returns to hear Simon tell how he and his father were going grand until they shot an albatross in the Antarctic.

I jest. I jest. The tale he tells is both more outlandish and more boring than anything Coleridge could have imagined. We won’t bother detailing its curves, but suffice to say Lily ends up spending some time above ground uncovering murky secrets from her father’s past. Then she goes back into the pit.

Huge sections of the film are taken up with Collins (game enough) and Pegg (laying it on not with a shovel but with an industrial muck spreader) scowling at one another in sepulchral gloom. This does limit the amount of time we’re exposed to his unconvincing make-up, but that is not sufficient excuse for the endless confinement. The last thing you want to offer punters in 2020 is an extended period of shut-in.

Why does this thing exist? Almost everyone is miscast. The director’s last film, Terminal, was not a success. Inheritance is not based on a bestselling airport novel. One helpful factor may have been fleeting similarities to the peerless TV series Succession. The family is equally Machiavellian. At least one plot point crosses over with a key twist in series one.

Don’t let that lead you astray. Look elsewhere for virtual methadone to hold you over until the real stuff gets back in the supply chain. Just awful.

Available to stream on July 6th