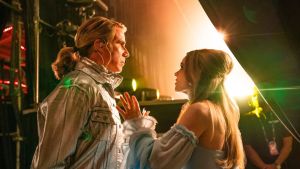 Graham Norton may be the only such name listed in the credits, but Eurovision superfans will find more than one thrilling cameo in this well-meaning Will Ferrell comedy, inspired by the planet’s most beloved song contest.

There’s a pleasing familiarity to the Ferrell fool at the heart of The Story of Fire Saga. And at age 52, his manbabies now have an additionally appealing absurdity. Marrying the naivety of Elf’s Buddy and the obliviousness of Talladega Nights’ Ricky Bobby, Lars (Ferrell) is an aspiring musician who has longed to represent his native Iceland at Eurovision since seeing Abba perform Waterloo. (Human years don’t count for much here.)

The adoring Sigrit (McAdams) makes up the other half of Fire Saga, a band who are routinely jeered at their local pub. When they are improbably given the opportunity to represent their country at the Eurovision Song Contest, nobody thinks they can win, least of all Lars’s disapproving dad – “my extremely handsome father”, as his crooning son has it – played by Pierce Brosnan.

Made by Wedding Crashers director David Dobkin from a screenplay by Ferrell and Andrew Steele (who previously collaborated on the underrated Casa di mi Padre), this isn’t as funny as Blades of Glory or The Other Guys or premier league Ferrell outings. It is, however, amusing and good-natured.

A very game cast help. Dan Stevens’s preening Russian contestant is a delight, Pierce Brosnan hasn’t arched his eyebrows this much since he quit James Bond, Demi Lovato turns out to have an unnerving capacity to undermine her own glamorous image, and famous Icelandic actors pop up to make merry with their native accents.

Made for Netflix – with an eye on US subscribers – the script is careful to school the viewer on the inherent absurdities of Eurovision. European viewers can simply sit back and enjoy the silliness.

‘This is such a terrible mess. But I feel the power of what we do more vividly than ever’
7

‘I don’t like Jack Reacher that much’: Lee Child and fellow crime writers on their creations
10

Mary Trump: How my family created the world’s most dangerous man
Real news has value SUBSCRIBE